Typical of the imagery of witchcraft, many of the symbols used are inverted. The goat extends his left rather than right hoof towards the child, while the quarter moon faces out of the canvas at the top left corner. [4] [5] In the middle high-ground, a number of bats can be seen flying overhead, their flocking motion echoing the curve of the crescent moon.
It was purchased in 1798 along with five other paintings related to witchcraft by the Duke and Duchess of Osuna. [2] The acquisition of the witchcraft paintings is attributed to the duchess rather than her husband, but it is not known whether they were commissioned or bought after completion. [3] In the twentieth century the painting was purchased by the financier José Lázaro Galdiano and donated to the Spanish state on his death.

Witches’ Sabbath shows the devil in the form of a garlanded goat, surrounded by a coven of disfigured, young and aging witches in a moonlit barren landscape. The goat possesses large horns and is crowned by a wreath of oak leaves. An old witch holds an emaciated infant in her hands. The devil seems to be acting as priest at an initiation ceremony for the child, though popular superstition at the time believed the devil often fed on children and human foetuses. The skeletons of two infants can be seen; one discarded to the left, the other held by a crone in the centre foreground.
Interest in the supernatural was a feature of Romanticism, and is to be found for example in Weber’s opera Der Freischütz. However, in a Spanish context, Goya’s paintings have been seen as a protest against those who upheld and enforced the values of the Spanish Inquisition, which had been active in Witch hunting during the seventeenth-century Basque witch trials. The later Witches Sabbath was painted as a bitter struggle raged between liberals and those in favour of a church and a royalist-lead state, which culminated in the so-called Ominous Decade (1823-1833). Both paintings can be seen as an attack on the superstitious beliefs rife in Spain during a period when tales of midnight gatherings of witches and the appearance of the devil were commonplace among the rural populace. They reflect the artist’s disdain for the popular tendency towards superstition and the church-led return to medieval fears. Goya’s depictions of such scenes mocked what he saw as medieval fears exploited by the established order for political capital and gain.

There is no record of Goya’s thoughts during this period. He completed the series during a period recuperating from illness, possibly lead poisoning, when he was in considerable mental and physical pain, [29] [37] and withdrew from public life. Witches’ Sabbath is believed to be a rather bitter, but silent, protest against the royalists and clergy who had retaken control of Spain after the Peninsular War of 1807–14. Advocates of the Enlightenment had sought to redistribute land to the peasants, to educate women, publish a vernacular Bible and, by replacing superstition with reason, put an end to the Inquisition. Witch hunting, seen during the Logroño Inquisition, was an appalling regression to liberals such as Goya. [31] As court painter Goya was a part of the established order; surviving evidence indicates he was acquiesced to the wishes of his patrons. Yet numerous paintings and etchings have emerged since, suggesting he had convictions favouring liberalism, enlightenment, and reason. He seems to have kept such beliefs private, only expressing them in his private art; his more sensitive works were not published at the time, probably for fear of reprisal or persecution. In Witches’ Sabbath Goya mocks and ridicules the superstition, fear and irrationality of the ignorant placing their faith in ghouls, quack doctors and tyrants. [14] [31]
Art historians assume Goya felt alienated from the social and political trends that followed the 1814 restoration of the Bourbon monarchy, and that he viewed these developments as reactionary means of social control. In his unpublished art he seems to have railed against what he saw as a tactical retreat into Medievalism. [14] It is thought that he had hoped for political and religious reform, but like many liberals became disillusioned when the restored Bourbon monarchy and Catholic hierarchy rejected the Spanish Constitution of 1812. [15]

The вЂBlack PaintingsвЂ™, or Pinturas NegrasвЂ™, were a series of fourteen fresco painted by Goya during the artistвЂ™s later years. There were likely created between 1819 and 1823. The вЂWitchesвЂ™ SabbathвЂ™ and the other works of the вЂBlack PaintingsвЂ™ were added to walls in dining and sitting rooms of the Quinta del Sordo (Deaf ManвЂ™s Villa). Named for its previous owner who was deaf, Goya also suffered from hearing loss when he moved to the villa in 1819. His hearing loss was caused by an unknown illness when he was 46, leaving him almost completely deaf. The mural were removed from the property in 1874 and transferred onto canvas. They are now found in the Museo del PradoвЂ™s collection in Madrid.
The intense and haunting paintings of the вЂBlack PaintingsвЂ™ including the вЂWitchesвЂ™ SabbathвЂ™ reflect distressing themes and GoyaвЂ™s personal view of humanity. They reflect the artists fear of insanity and relapse after suffering two brushes with serious illnesses, one of which left him deaf. The paintings also show GoyaвЂ™s bleak view of humanity, which was heavily influenced by conflict during the early nineteenth century. It was during this time that Goya experienced the hysteria and fear of NapoleonвЂ™s invasion of Spain and the Napoleonic Wars. There was also major social and political change in Spain, and many pieces in the вЂBlack PaintingsвЂ™ reflect conflict that reflect the real-life battle between left and right forces. 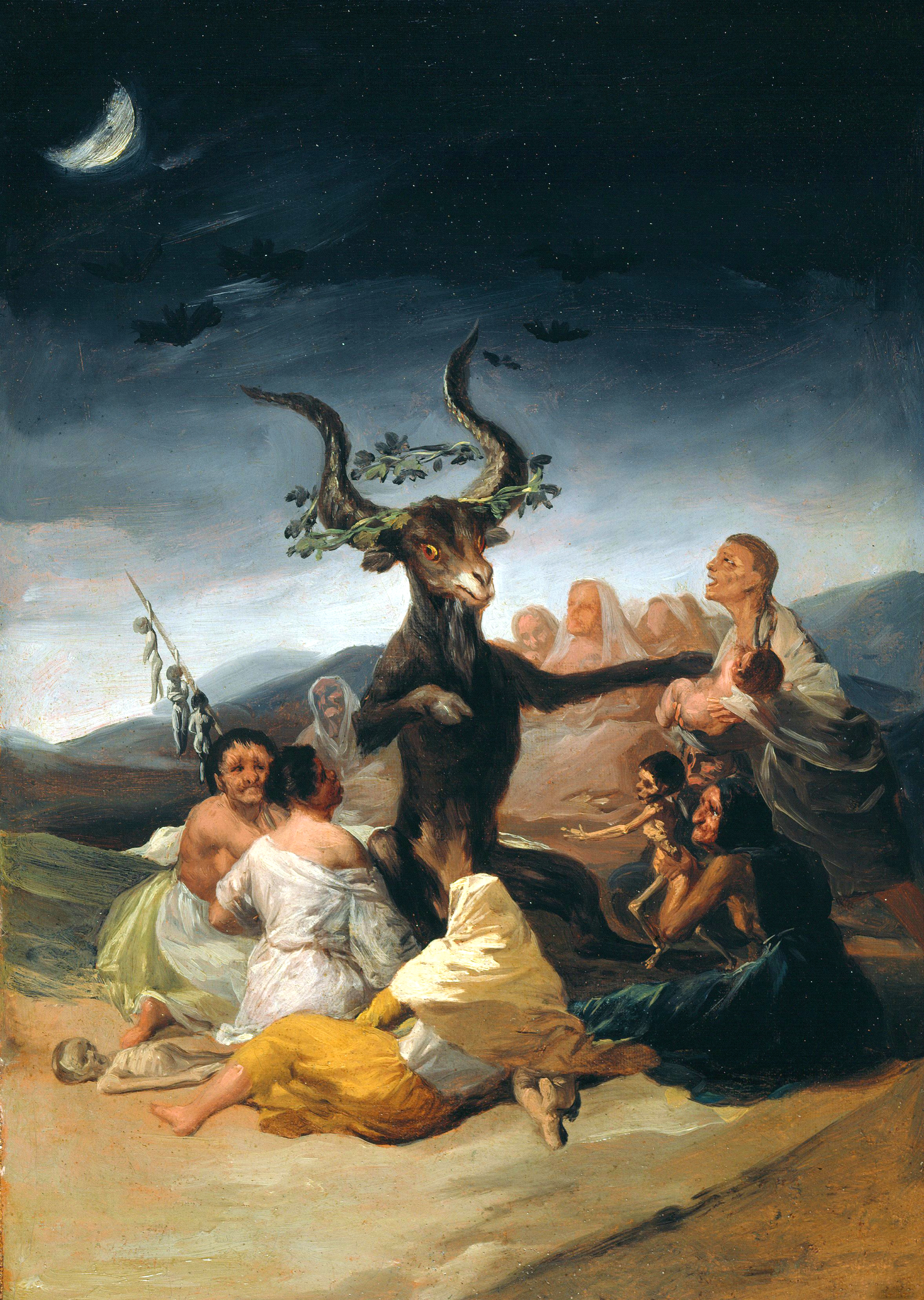 As much as I love his overall works, shown in great detail in the two Goya books that I am lucky enough to own, there’s just something about the so-called “black paintings” that I find intriguing. Goya painted the series during a rough patch in his life, and having been in similar positions often I know what it is like to use art as a catharsis.
Closeup, El Aquelarre, or Witches Sabbath, Francisco José de Goya y Lucientes