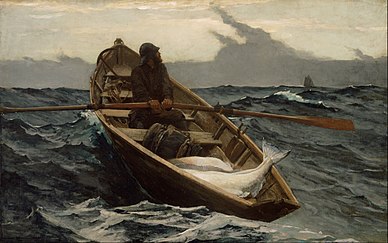 In addition to Herring Nets and Breezing Up, which share the focus on Maine fishermen, Homer’s Lost on the Grand Banks (also 1885) and After the Hurricane, Bahamas 1899 depict tragedy at sea: the former another fisherman in mortal danger at sea, the latter one thrown up on shore dead. In contrast, in Summer Night (1890) the sea is raging in the background while in the middle ground people silhouetted against the waves watch, but in the foreground two girls are dancing, unconcerned.
He had a studio built for him in Prout’s Neck, which was completed in 1884. Here he painted The Fog Warning, one of his three best paintings he completed there in 1885 depicting the lives of the local fishermen. These are considered among his best; the others are Lost on the Grand Banks, and The Herring Net. [1] [2] [3] Many of his late paintings, like The Fog Warning, depict a single figure at sea. [2] Another theme in many of his paintings of the fisherman’s life was the bounty of the sea, which also provides the people’s livelihood; the two are combined in this painting, which was originally exhibited under the title Halibut Fishing. [2]

Winslow Homer made his reputation in the 1860s with images of the Union troops during the Civil War and of the returning veterans afterward. In the late 1860s and 1870s he turned to lighter subject matter and found an equally enthusiastic audience for his paintings of healthy, handsome children playing in the country or at the seashore, and of adults enjoying leisure-time pursuits. However, perhaps feeling the need for more important subjects in his art, Homer spent 1881–82 in Cullercoats, England. Both a fishing village and an artists’ colony, Cullercoats provided Homer with more profound themes: the arduous lives of fishermen and their families. Shortly after returning to the United States late in 1882, he settled in Prout’s Neck, Maine, similarly both a fishing community and a pleasant summer resort, where he painted the local population and their work. The Fog Warning is one of three paintings he produced at Prout’s Neck in 1885 describing the lives of the North Atlantic fishermen.
Like many of Homer’s 1870s images featuring farm children, The Fog Warning is a painting with a narrative, though its tale is disturbing rather than charming. As indicated by the halibut in his dory, the fisherman in this picture has been successful. But the hardest task of the day, the return to the main ship, is still ahead of him. He turns to look at the horizon, measuring the distance to the mother ship, and to safety. The seas are choppy and the dory rocks high on the waves, making it clear that the journey home will require considerable physical effort. But more threatening is the approaching fog bank, whose streamers echo, even mock, the fisherman’s profile. Contemporary descriptions of the fishing industry in New England make clear that the protagonist’s plight—the danger of losing sight of his vessel—was an all-too-familiar event.
The dramatic tension of The Fog Warning is all the greater because Homer does not specify the fisherman’s fate. However, Lost on the Grand Banks (1885, private collection), another painting in the Prout’s Neck series, shows that the fishermen’s peril was a deadly one. An account related in the 1876 history The Fisheries of Gloucester tells of the insidious horrors to which fishermen were prey and could well have served as a description of The Fog Warning: “His frail boat rides like a shell upon the surface of the sea . . . a moment of carelessness or inattention, or a slight miscalculation, may cost him his life. And a greater foe than carelessness lies in wait for its prey. The stealthy fog enwraps him in its folds, blinds his vision, cuts off all marks to guide his course, and leaves him afloat in a measureless void.”[1]

Set the tone of your room from the walls out—”from the ground up” is so dated. Mix and match your favorite art prints on a gallery wall showcasing everything that makes your style unique. Art prints available in five sizes, from x-small to x-large. *Exact sizing may vary slightly due to printing process, we advise waiting to buy frames until the prints arrive.

Some of the technologies we use are necessary for critical functions like security and site integrity, account authentication, security and privacy preferences, internal site usage and maintenance data, and to make the site work correctly for browsing and transactions.
These technologies are used for things like personalized ads.