why did the stylistic characteristics of ancient egyptian art change relatively little over time? 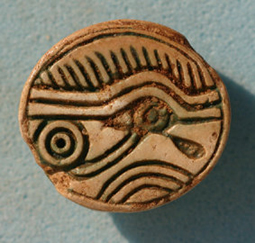 The combination of geometric regularity is characteristic of all ancient Egyptian art which was often described as cubed and constrained. Its purpose was to keep alive the history of the individual and give eternal life to the Pharaohs. The divine nature of the rulers evolved the art of sculpture. In order for the people to be able to see what they worship, statues became the most important symbol of divinity. Enormous sculptures where built up to represent famous Pharaohs and their queens.
Relief sculpture and painting

Many small carved objects have been discovered, from toys to utensils, and alabaster was used for the more expensive objects. In creating any statuary, strict conventions, accompanied by a rating system, were followed. This resulted in a rather timeless quality, as few changes were instituted over thousands of years.
Ka statues, which were meant to provide a resting place for the ka part of the soul, were present in tombs as of Dynasty IV (2680-2565 BCE). These were often made of wood, and were called reserve heads, which were plain, hairless and naturalistic. Early tombs had small models of slaves, animals, buildings, and objects to provide life for the deceased in the afterworld. Later, ushabti figures were present as funerary figures to act as servants for the deceased, should he or she be called upon to do manual labor in the afterlife.

The great age of ancient Egypt lasted ca. 3000-1000 BC (see History of the Ancient Middle East). For the most part, the style of Egyptian art throughout this period (and centuries beyond) changed very little. This staunch conservatism is true of Egyptian architecture, painting, and sculpture.
While most Egyptian buildings were composed of sun-baked bricks of Nile clay, the material of choice for monumental buildings was stone. Unlike Mesopotamia, Egypt is rich in stone (especially limestone), thanks to the presence of mountains along each side of the Nile River Valley.

A change was to come with the advent of the Kushite (Nubian) kings of the 25th dynasty. The portraiture of the Kushite kings exhibits a brutal realism that may owe much to the royal sculpture of the 12th dynasty; the sphinx of Taharqa, fourth king of the 25th dynasty, is a good example.
The placing of votive statues in temples led to a proliferation of private sculptures during the New Kingdom. The sculptures of Senenmut, steward of Hatshepsut, exemplify the development. At least 23 votive statues (some fragmentary) of this royal favourite are known, exhibiting many different forms. 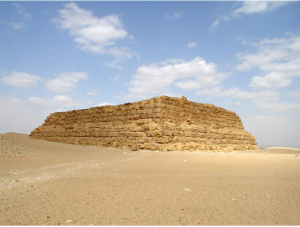 During the Old Kingdom, royal mastabas eventually developed into rock-cut “step pyramids” and then “true pyramids,” although non-royal use of mastabas continued to be used for more than a thousand years. As the pyramids were constructed for the kings, mastabas for lesser royals were constructed around them. The interior walls of the tombs were decorated with scenes of daily life and funerary rituals . Because of the riches included in graves, tombs were a tempting site for grave-robbers. The increasing size of the pyramids is in part credited to protecting the valuables within, and many other tombs were built into rock cliffs in an attempt to thwart grave robbers.
Head of pharaoh Sesostris III, made of red granite, circa 1850 BCE: Some of the sculptures of Senusret III, like this one, portray him as an aging man—a style that deviated from the standard representation of kings.