who is david hockney

In 1971, Hockney experienced some tension in his relationship with Schlesinger. The age difference had become a problem, and Schlesinger wanted some independence and room to grow. Hockney’s eye also began to wander, and his social life became more active once again. He continued to entertain large groups of people in his studio and basked in the glory of his fame. Hockney decided to travel to America for a break, and when he returned, he found out that Schlesinger had moved to Paris and had been having an affair. Although he was hurt, Hockney was very relieved. A while later, the two reunited in Barcelona, but once again had many difficulties. Schlesinger felt that Hockney placed his work above everything else and felt as though he himself were only an erotic object to be shown off to others. He decided never to move back in with Hockney again. Hockney was devastated and started taking Valium to combat the depression and loneliness he suffered.
In the nineties, Hockney continued to experiment with rising technologies. He used a color laser copier in some of his works and reproduced some of his paintings. Hockney was impressed with the vibrancy of color that could be achieved using such devices. He also began sending drawings to friends via fax machines and was thrilled with this new way of communication. Much of the appeal lay in the fact that these newly produced images had no financial value at all. Thus sharing art became a true act of love and appreciation.

David Hockney
Going Up Garrowby Hill 2000
Private Collection © David Hockney
Hockney wants to capture his relationships with the people he knew. Many of his paintings are of men that he loved and spent time with. Like the painting of his parents, they show a tenderness towards the people who really mattered for Hockney. This includes his friends and other couples Hockney admired. In George Lawson and Wayne Sleep, Hockney shows Wayne, a dancer, and his partner George. The way Wayne, who is framed in the doorway, gazes at George shows a look of love that Hockney clearly felt was important to share. 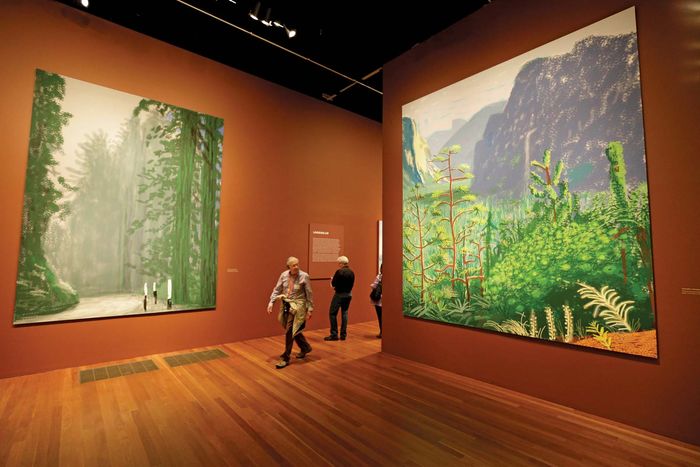 After experimenting with abstract landscapes during the 1990s, Hockney considered the representation of space in a series of multi-paneled works during the early 21st century. He also pursued his long-standing interest in new technologies. Among the many large-scale pieces featured in the traveling exhibition “David Hockney: A Bigger Picture” (2012–14; “David Hockney: A Bigger Exhibition” at the de Young Museum in San Francisco) were several compelling drawings done on an iPad. A traveling retrospective that opened at Tate Britain in 2017 attested to Hockney’s enduring popularity when it became the most-visited exhibition at that venue. The following year Portrait of an Artist (Pool with Two Figures), one of Hockney’s most well-known paintings, sold at auction for some $90 million, breaking the record for a living artist and cementing his place in the art history canon.
He studied at the Bradford College of Art (1953–57) and the Royal College of Art, London (1959–62), where he received a gold medal in the graduate competition. He visited the United States in 1961 and returned in 1964–67 to teach at the universities of Iowa, Colorado, and California and thereafter commuted between England and the United States until settling permanently in Los Angeles in 1978. That city’s intense glaring light and sleek “California modern” aesthetic had a pronounced influence on his work.

Hockney arrived in the professional art world on the coattails of the 1960s and the world’s fascination with Pop Art. Hockney was able to manipulate his innate skill as a photographer and his learned ability to paint and combined them into something that, while not new, took people by surprise. For example, Hockney would take two, sometimes more, photographs of the same image but from different vantage points, thereby changing the actual image only slightly. However, by combining the photos, Hockney created a distinct and well-integrated work. The idea of a photographic collage, while not new, provided Hockney with a new medium to capitalize on. Even though other artists such as Rejlander and Muybridge had done similar work to Hockney’s, they had not attempted it on the same scale. Such ability earned Hockney the 1985 Infinity Award. This achievement is awarded to an artist in any media that utilizes photography.
Hockney developed the ability to take an ordinary scene and develop it through photographs and paint into something incredibly pleasing to view. The ability to develop such scenes immediately earned Hockney a place among contemporary artists of his time. Although not considered a master yet, his work was certainly begin to demonstrate the signs. A second American artist that influenced Hockney was Robert Rauschenberg. Rauschenberg’s compositions also lead Hockney in becoming more aware of his surroundings and how such surroundings could be propelled into lasting art. These influences, along with Hockney’s own indescribable tastes, allowed Hockney the rare privilege to experiment with his work, while still growing to become a serious artist.

Born in Bradford, England, in 1937, David Hockney attended art school in London before moving to Los Angeles in the 1960s. There, he painted his famous swimming pool paintings. In the 1970s, Hockney began working in photography, creating photo collages he called joiners. He continues to create and exhibit art, and in 2011 he was voted the most influential British artist of the 20th century.
Hockney attended the Bradford College of Art from 1953 to 1957. Then, because he was a conscientious objector to military service, he spent two years working in hospitals to fulfill his national service requirement. In 1959, he entered graduate school at the Royal College of Art in London alongside other young artists such as Peter Blake and Allen Jones, and he experimented with different forms, including abstract expressionism. He did well as a student, and his paintings won prizes and were purchased for private collections.