when was jacob lawrence born

A celebrated painter, storyteller, and interpreter of the African-American experience, Jacob Lawrence was born in Atlantic City in 1917 to a couple who had moved from the rural South to find a better life in the North. After their parents separated, Lawrence and his two younger siblings lived in settlement houses and foster homes in Philadelphia until their mother could support them in New York. He came to New York in 1930, at the age of thirteen, and quickly discovered art as a means of expression. Lawrence’s education in art was both informal—observing the activity and rhythms of the streets of Harlem—and formal, in after-school community workshops at Utopia House and later at the Harlem Art Workshop. At both centers he was able to study with the prominent artist, Charles Alston, and in the course of his work, he became immersed in the cultural activity and fervor of the artists and writers who led the Harlem Renaissance, Alston among them. Lawrence received a scholarship to the American Artists School, and he began to gain some notice for his dramatic and lively portrayals of both contemporary scenes of African-American urban life as well as historical events, all of which he depicted in crisp shapes, bright, clear colors, dynamic patterns, and through revealing posture and gestures. Lawrence’s mother had hoped he would choose a career in civil service, but members of the creative community, including poet Claude McKay and sculptor Augusta Savage, encouraged him to become an artist. He was painting, he said, “a portrait of myself,” in his portraits of the Harlem community. In 1938, Lawrence had his first solo exhibition at the Harlem YMCA and started working in the easel painting division of the WPA Federal Art Project. In 1940, he received a grant from the Rosenwald Foundation to create a series of images on the migration of African-Americans from the South. The painter Gwendolyn Knight assisted him on the captions for the images and initial coating of the panels. They married in 1941. The same year The Migration of the Negro series had its debut at the Downtown Gallery. Lawrence was the first artist of color to be represented by a major New York gallery, and the success of this exhibition gave him national prominence.
Lawrence was active as both a painter and art educator. He taught at Black Mountain College in North Carolina in 1946, and later at the Skowhegan School of Painting and Sculpture in Maine and the New School for Social Research in New York. In 1971, Lawrence became a professor of painting at the University of Washington in Seattle. In his later career he was also known for his serigraphs (silkscreens), many of them versions of series of paintings completed in earlier years, as well as for his book illustrations. Lawrence was still drawing and painting in preparation for still another series of works when he died in Seattle in 2000.

On July 24, 1941, Lawrence married the painter Gwendolyn Knight, also a student of Savage. She supported his work and even helped him with captions for many of his series of paintings. [2] They were married until his death in 2000.
After many years in New York, in 1970 Lawrence and Knight moved to the Pacific Northwest, where he had been invited to be an art professor at the University of Washington. They settled in Seattle. Some of his works are displayed in the university’s Meany Hall for the Performing Arts and in the Paul G. Allen Center for Computer Science & Engineering. Lawrence’s painting Theater, installed in the main lobby of Meany Hall, was commissioned by the University in 1985 for that space. 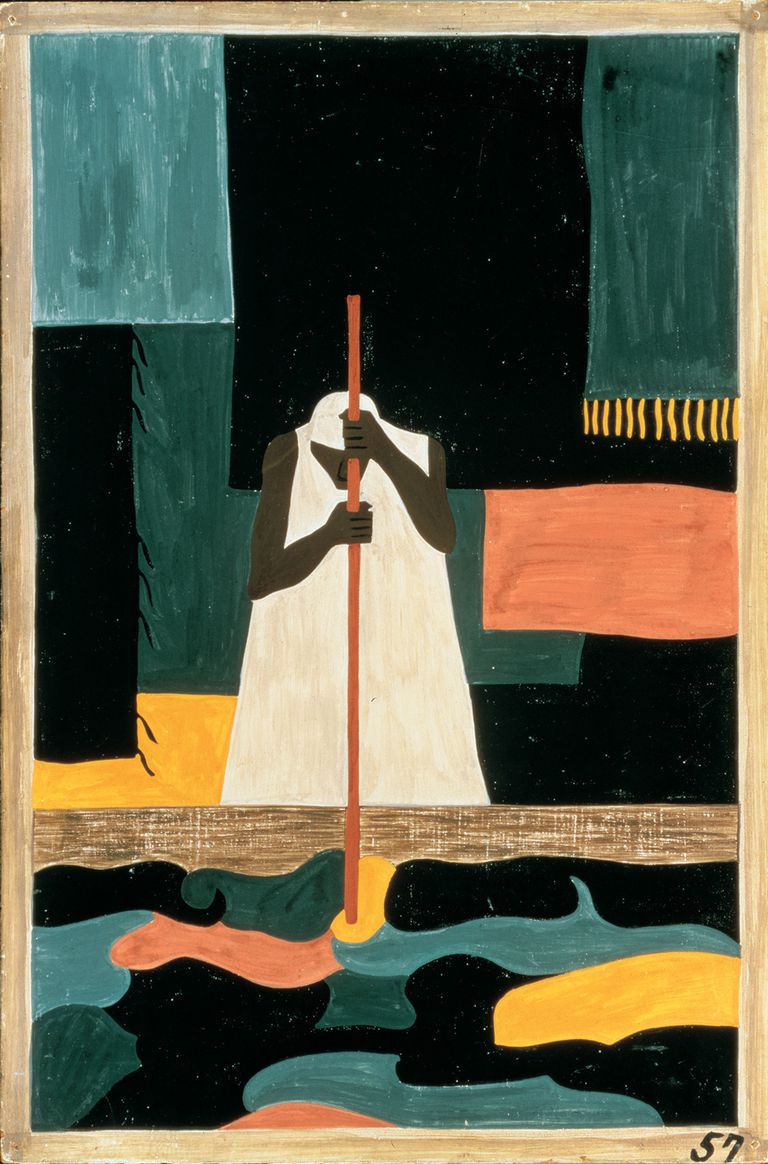 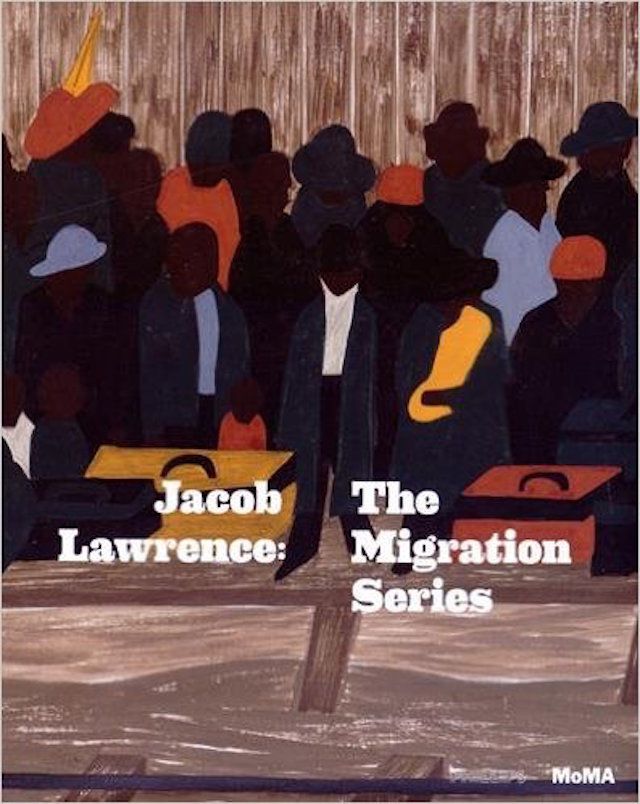 Lawrence was drafted into the Coast Guard during World War II and served as a combat artist. When discharged he returned to Harlem and resumed painting scenes of everyday life. He taught at various places, and in 1971 accepted a permanent teaching position as an art professor at the University of Washington in Seattle where he stayed for fifteen years.
In 1941, a period of extreme racial segregation, Lawrence overcame the racial divide to become the first African-American artist whose work was acquired by The Museum of Modern Art, and in 1942 he became the first African-American to join a New York gallery. He was twenty-four years old at the time. 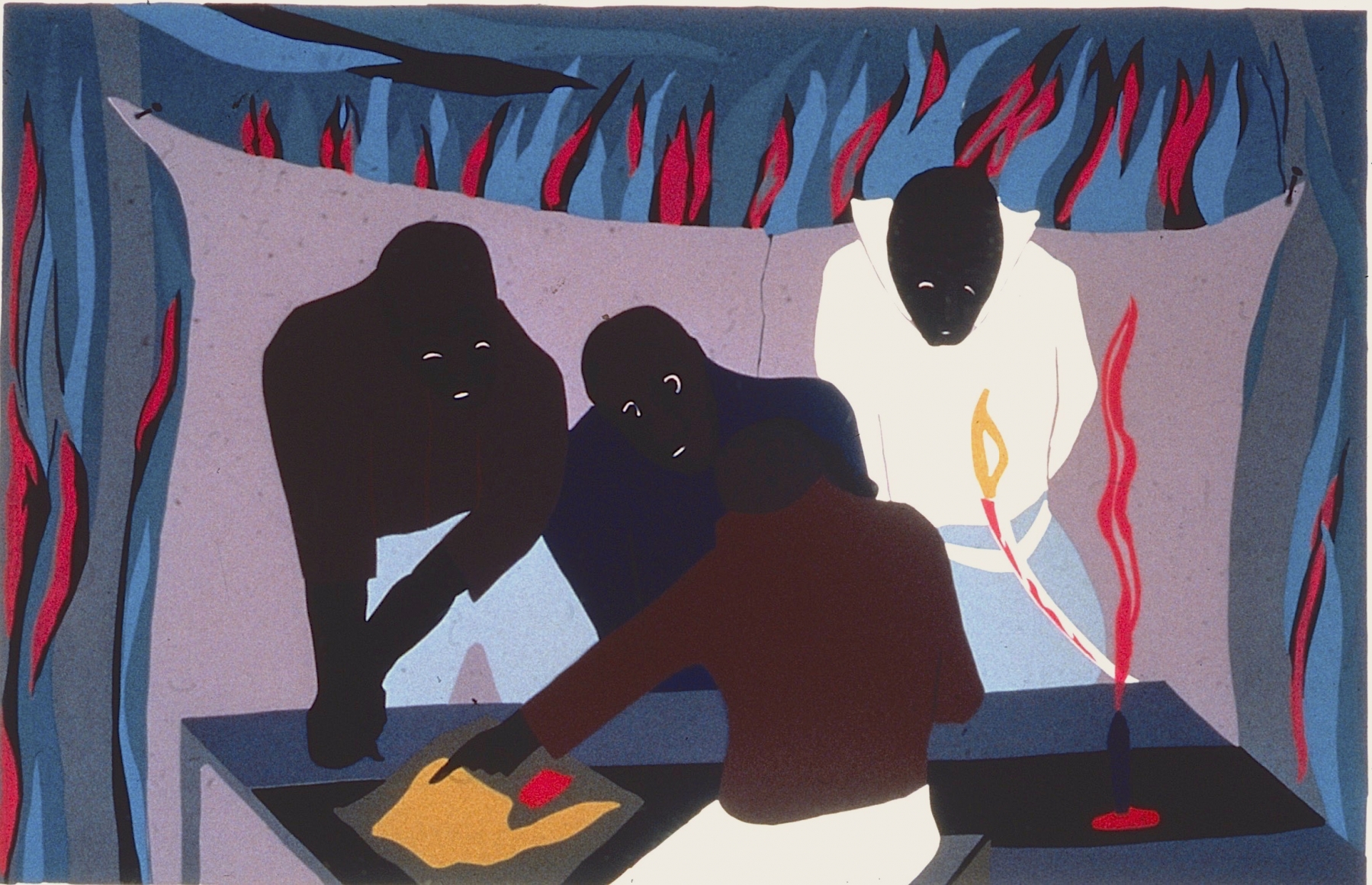 A definitive two-volume catalogue raisonné and examination of Lawrence’s life and work, Over the Line: The Art and Life of Jacob Lawrence, was published in the fall of 2000 by the University of Washington Press.
On the Way, 1990
Lithograph on Rives BFK paper
40 x 30 inches