what were some of the main features of egyptian art

The civilization of Ancient Egypt ruled the land of the Nile for over 3000 years. Surprisingly enough, their art changed little during that time. The original style of art was first used in 3000 B.C. and the most respected artists continued to copy these styles for the next 3000 years.
Religion and Art

We will only use your personal information to register you for OUPblog articles.
Very Short Introductions (VSI) series combines a small format with authoritative analysis and big ideas for hundreds of topic areas. Written by our expert authors, these books can change the way you think about the things that interest you and are the perfect introduction to subjects you previously knew nothing about. Grow your knowledge with OUPblog and the VSI series every Friday, subscribe to Very Short Introductions articles on the OUPblog via email or RSS, and like Very Short Introductions on Facebook. This series is also available online, and you can recommend it to your local librarian.

About 2150 the central Egyptian government seems to have fallen apart. Egypt once more became a series of separate states in great confusion. During this time little building or sculpture was done.
Smaller, brightly painted limestone sculptures were also made for the tomb. They usually showed the owner as a youthful man. Minor members of the royal family and many nobles had statues made of red granite and other hard stones, but these were expensive. At all times throughout the Old Kingdom wood was used for statues. It, too, was brightly painted. The eyes were often inlaid, giving the statue a lifelike appearance. Most officials had several statues made for their tombs. This skill would develop during the Old Kingdom of Egypt (c. 2613-2181 BCE) when a strong central government and economic prosperity combined to allow for monumental works like the Great Pyramid of Giza, the Sphinx, and elaborate tomb and temple paintings. The obelisk, first developed in the Early Dynastic Period, was refined and more widely used during the Old Kingdom. Tomb paintings became increasingly sophisticated but statuary remained static for the most part. A comparison between the statue of Djoser from Saqqara and a small ivory statue of King Khufu (2589-2566 BCE) found at Giza display the same form and technique. Both of these works, even so, are exceptional pieces in execution and detail.
Egypt of the New Kingdom is the Egypt of empire. As the borders of the country expanded, Egyptian artists were introduced to different styles and techniques which improved their skills. The metalwork of the Hittites which the Egyptians made use of in weaponry also influenced art. The wealth of the country was reflected in the enormity of individual artworks as well as their quality. The pharaoh Amenhotep III (1386-1353 BCE) built so many monuments and temples that later scholars attributed to him an exceptionally long reign. Among his greatest works are the Colossi of Memnon, two enormous statues of the seated king rising 60 ft (18 m) high and weighing 720 tons each. When they were built they stood at the entrance to Amenhotep III’s mortuary temple, which is now gone. 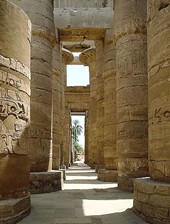 As the spirit inhabited the body, the preservation of the latter against decay was also critical. The use of tightly wrapped bandages to mummify the corpse, and the removal and packaging of internal organs within ceramic canopic jars and other opulent sarcophagi became widespread among the ruling elite. All these arrangements helped to support a nationwide industry of Egyptian artists and craftsmen who laboured to produce the artworks (paintings, scultures, pottery, ceramics, jewellery and metalwork) required.
Nearly all of Ancient Egypt’s surviving paintings were discovered in tombs of the pharaohs or high governmental officials, and portrays scenes of the afterlife. Known as funerary art, these pictures depicted the narrative of life after death as well as things like servants, boats and food to help the deceased in their trip through the after life. These paintings would be executed on papyrus, on panels, (using encaustic paint) or on walls in the form of fresco murals (using tempera). In addition, models (eg. of boats, granaries, butcher shops, and kitchens) were included in the tomb in order to guarantee the future well-being of the dead person.