what was the motive of broadway boogie woogie

In the completion of Broadway Boogie-Woogie the same sort of process took place as in the final reworking of Composition London. The painting seems initially to have been based on lines, mainly yellow, running through it (and in this respect closely related to New York City I) and on some connecting bands of different color, which brought about a change in direction and proportion. To this basic composition were added small blocks of red, blue, gray, and sometimes the same yellow as the traversing lines, giving the whole a new tempo, an entirely unexpected movement, a bouncing staccato rhythm. This new tempo is perhaps the most striking aspect. Whereas Mondrian’s early paintings were built up out of long continuous lines and large planes, which could be compared to whole or half notes in music, there now appear much smaller forms, comparable to eighth and sixteenth notes, contrasting only here and there with larger areas. This innovation, which evidently took place while Mondrian was working on the painting, gives the canvas a new and sparkling vivacity.
Broadway Boogie-Woogie is the last painting Mondrian completed. In the early phases of its genesis, the two 1942 drawings in the Newman Collection, it still shows many points of coincidence with the painting preceded it, New York City I. In the preliminary studies mythm of the painting is determined by the long lines of the grid, while other accents indicate the insertion of little bands of unbounded color, characteristic of the enlivening alterations that Mondrian made in New York on the paintings of his last years in Europe. One example of a painting so changed is Composition London, which in its present state – that is, after the changes Mondrian made on it in New York – must be roughly contemporaneous with the Broadway Boogie-Woogie sketches. 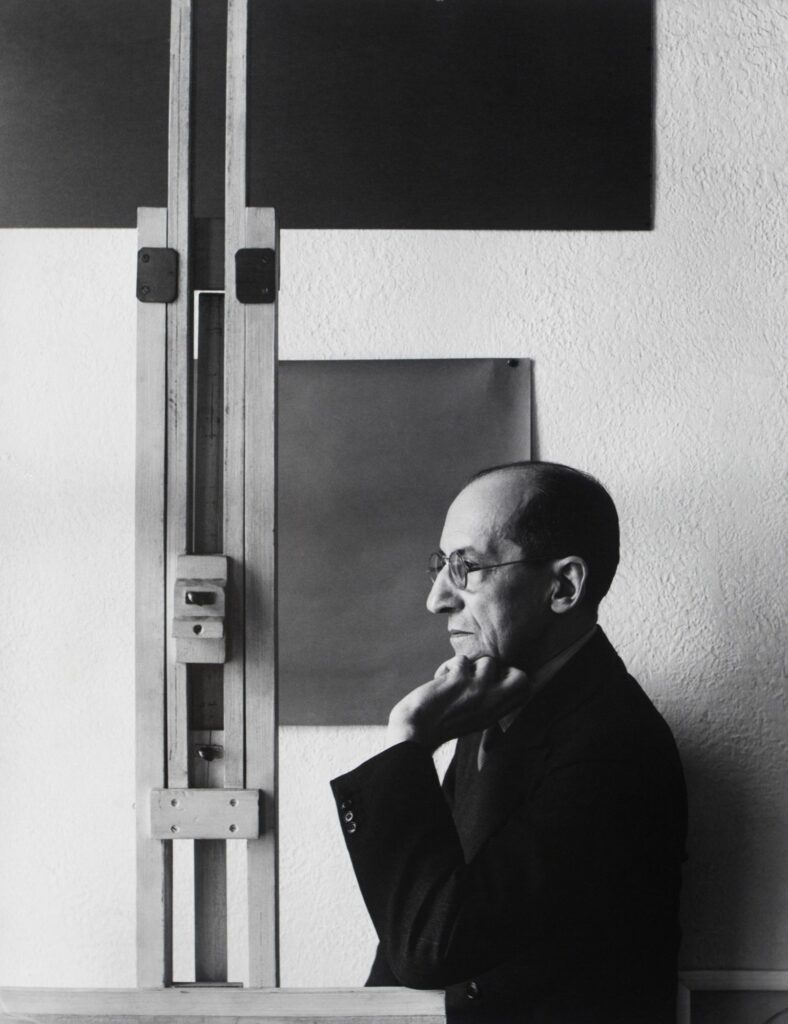 “I came to the destruction of volume by the use of the plane. This I accomplished by means of lines cutting the planes. But still the plane remained too intact. So I came to making lines and brought the color within these lines. Now the problem was to destroy these lines also through mutual opposition… Perhaps I do not express myself clearly in this, but it may give you some idea of why I left the cubist influence. True Boogie Woogie I conceive as homogeneous in intention with mine in painting.”
While Broadway Boogie Woogie echoes Mondrian’s experiments with grids and blocks of color, it is distinctively a step forward from his previous works such as Composition II in Red, Blue and Yellow. Broadway Boogie Woogie is almost busy, with its grid patterns and colored dots inspired by both the gridlike architecture of New York and the frenetic energy of boogie woogie music. Mondrian arrived in New York in 1940, one of the many European artists who moved to the United States to escape World War II. He immediately fell in love with the city and with boogie-woogie music, to which he was introduced on his first evening in New York. Soon he began, as he said, to put a little boogie-woogie into his paintings.
Mondrian’s appreciation of boogie-woogie may have sprung partly from the fact that he saw its goals as analogous to his own: “destruction of melody which is the destruction of natural appearance; and construction through the continuous opposition of pure means— dynamic rhythm.”