A very good friend of mine once asked me what my favorite painting was. It took a little bit of thinking. Favorite artist…that’s easy. Winslow Homer. But choosing from among his works was a little challenging. In the end, though, there’s one that really grabs me, and it does so every time I look at it.
He painted it just a few months after Appomattox. The war was over and hundreds of thousands of men were returning home. How would they adjust given the things they’d seen and experienced? Would it be possible to go back to life as usual? The same questions our veterans face to this day.

The scenes he chose were candid, real, and earnest. They are generally passive, not action scenes by any means, yet the sense of emotion and atmosphere in his works are nonetheless palpable. His art provides a wonderful, valuable source on the Civil War soldier as he truly was.
Winslow Homer (1836-1910) was born in Boston and grew up in a part of Cambridge that later become Belmont. He inherited his mother’s artistic skill and taught himself to draw and paint. As a young man he apprenticed as a lithographer in Boston (which seems to have been a rather dismal experience for him), then set off to New York in 1859 at age 23 to establish his own studio. By 1861, he was working as an artist for Harpers Weekly. With the Civil War looming, Harpers sent him to Washington City in March 1861 where Homer rendered depictions of Lincoln’s inauguration.

The painting, “The Veteran in a New Field” vividly displays the disquietude between the multiple forces behind the meaning of this painting. In particular, the struggle between the morose mourning and grieving, and the optimistic tone and happiness that this painting gives off. It is because of this that the picture here in particular had stood out to me. The simplicity, and yet the complicated undertones of the picture that display the struggling tones are what stood out to me.
Winslow Homer, with his progression of his paintings, shows that there is a simple necessity between the relationship of the simple farmer and the role that the simple farmer used to play: a past soldier in the Civil War. This past soldier has thrown his jacket aside and is now doing his previous job that he had used to do before the Civil War, and that is being a farmer. Also, in the picture, the abundance of the wheat fields particularly stand outs to the audience. Wheat fields can represent both the somber mood of the atmosphere, along with the boundless optimism that can be seen in the picture. It was often in the wheat fields that the soldiers have fought their wars, and this image is often associated with war. Americans association with the wheat fields and war can be seen in one specific photograph. “One particularly disturbing photograph of soldiers who had died in battle at Gettysburg was published with the title “A Harvest of Death.” (The Veteran 40). However, at the same time, this bountiful field of what may also represent the “hope, bounty, and the renewal of life.” The northern crop of wheat also connotes the Union’s victory over the south. Overall, the tones of morose death and hopeful life are overlapping each other in this one simple picture. 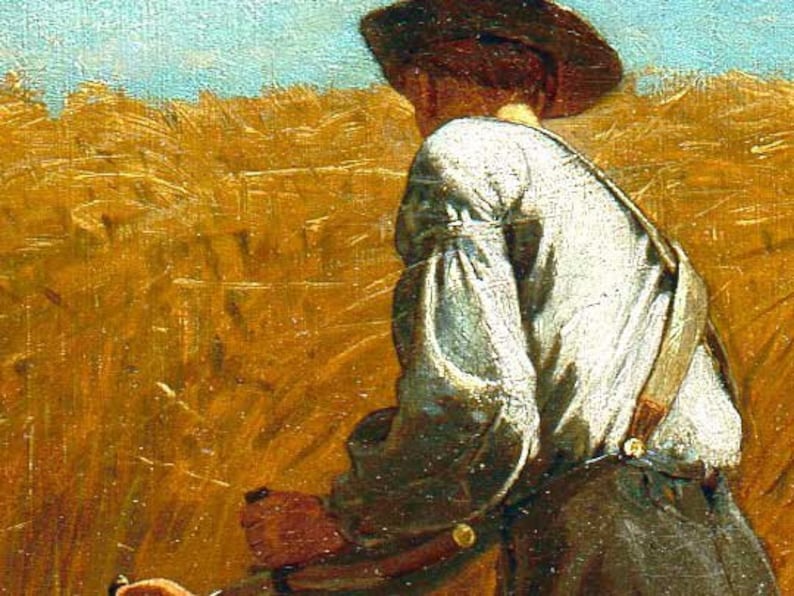 These technologies are used for things like personalized ads.
Hmm, something went wrong.