the world in the age of the surrealists map Three points of immediate interest are likely to captivate the viewer of this map. First, the equator deviates from a straight line. Second, the Pacific rather than the Atlantic occupies the center of the drawing, thus banishing Europe (and its ethnocentrism) to the edge of the page and the end of the earth. Third, North America has meanwhile been swallowed up entirely by Alaska and Labrador. There are other mischievous deformations: for instance, Easter Island looms large, Ireland towers over England, while Paris has become the capital of Germany.
—. An Autobiographical Study, Inhibitions, Symptoms and Anxiety, The Question of Lay Analysis and Other Works. The Standard Edition of the Complete Psychological Works of Sigmund Freud. Ed. James Strachey. Vol. 20. London: Hogarth Press, 177-258 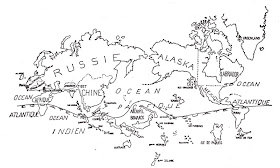 Well I can safely say I agree with that, what do you think?
So destroy all borders, but having said that I still feel the need to shout Free Palestine. Call me a hypocrite .
heddwch/peace.
The Surrealists amused themselves by creating a map that puts imperialist powers in their place. For example: other than Alaska, the United States are invisible; mainland Britain is dwarfed by Ireland; Easter Island looms over a tiny Australia; and only two cities are marked, Paris and Constantinople, with the rest of France and Turkey missing.
This I guess was a map of the Surrealists cultural ideas. They gave great importance to the shattering of rational thought and bourgeois ideas and values, they aimed to free people from staid ideas and restrictive practices, cultures and structures, borrowing loosely from the ideologies of socialism and anarchism.
I too like the subversion of conventions, and draw on an internationalist world view as a source of inspiration and have also always been weary of nationalism and the waving of flags, though I do confess to having supported a few.
The legacy of their ideas lives on however, and today we live in a period of rising movements against borders. Facts are, all borders are manmade and all nations are based on fakery and vivid imagination and subsequently the logic of the world’s order equals nonsense.
In 1925 Katherine Harman in a book called ‘ You are here ‘ an early surrealist manifesto wrote
“Even more than patriotism- which is a quite commonplace sort of hysteria, though emptier and shorter-lived than most- we are disgusted by the idea of belonging to a country at all, which is the most bestial and least philosopic of the concepts to which we are subjected. Wherever Western civilistion is dominant, all human contact has dissapeared, except contact from which money can be made – payment in hard cash.”

However none of the charges against Surrealism take into account the genuine commitment to internationalism and anti-colonialism that most of the major Surrealist showed throughout their careers, and the impact it was to have in the Caribbean and on the Négritude movement.
The most obvious of the divergences is the equatorial line that instead of holding to a straight line wavers and snakes all over the place. Then there is the fact that the Pacific Ocean is the centre of the map instead of the traditional Atlantic. However these changes are only scratching the surface. On closer inspection we find an even more radical re-invention of the world. Ferdinand Cheval (From Wikipedia) Ferdinand Cheval who was born in 1836 and died on 19th August, 1924, was a French postman who spent 33 years of his life building an “Ideal Palace” (French Palais ideal) which is regarded as an extraordinary example of naïve art architecture. Ferdinand Cheval lived in Chateauneuf-de-Galaure, in the Drome departement of France.
Artprice: The Top 10 of Surrealism | Markets Insider

In 1918, Ernst was demobilised and returned to Cologne. He soon married art history student Luise Straus, whom he had met in 1914. In 1919, Ernst visited Paul Klee in Munich and studied paintings by Giorgio de Chirico. The same year, inspired by de Chirico and mail-order catalogues, teaching-aide manuals and similar sources, he produced his first collages (notably Fiat modes, a portfolio of lithographs), a technique which would dominate his artistic pursuits. Also in 1919 Ernst, social activist Johannes Theodor Baargeld and several colleagues founded the Cologne Dada group. In 1919–20 Ernst and Baargeld published various short-lived magazines such as Der Strom, die Schammade and organised Dada exhibitions. [1]
In September 1939, the outbreak of World War II caused Ernst to be interned as an “undesirable foreigner” in Camp des Milles, near Aix-en-Provence, along with fellow surrealist, Hans Bellmer, who had recently emigrated to Paris. He had been living with his lover and fellow surrealist painter, Leonora Carrington who, not knowing whether he would return, saw no option but to sell their house to repay their debts and leave for Spain. Thanks to the intercession of Paul Éluard and other friends, including the journalist Varian Fry, he was released a few weeks later. Soon after the German occupation of France, he was arrested again, this time by the Gestapo but managed to escape and flee to America with the help of Peggy Guggenheim and Fry. [11] Ernst and Peggy Guggenheim arrived in the United States in 1941 and were married at the end of the year. [12] Along with other artists and friends (Marcel Duchamp and Marc Chagall) who had fled from the war and lived in New York City, Ernst helped inspire the development of Abstract expressionism.