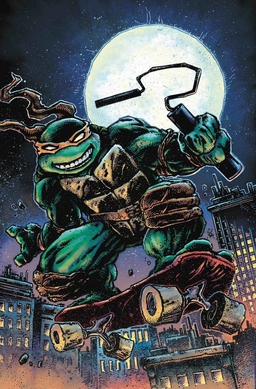 In the 2018 animated series, Rise of the Teenage Mutant Ninja Turtles, Brandon Mychal Smith voices “Michelangelo, the youngest brother, and depicted as preteen, as he is 13 years old. Also an artist and awesome skateboarder with a wild colorful, and imaginative personality.” [8] This incarnation of Michelangelo lacks a surfer accent, and likes to refer to himself as the artist of the group. He possesses a more childlike naiveness. He also has a strong passion of cooking too.
Michelangelo also received his distinctive voice, which has been imitated in other portrayals of him, in the 1990 series. Employing a “surfer slang” vocabulary, he customarily spoke with a unique hybrid of a Californian surfer accent (not unlike the speech of the Spicoli character from Fast Times at Ridgemont High) and what may have been a stereotypical “stoner” accent, though no reference is ever made to drugs in the series and it is likely that the voicing simply emphasized his laid-back and somewhat innocent attitude. In fact, Michelangelo appeared in a 1990 animated special, Cartoon All-Stars to the Rescue, alongside other famous cartoon characters, intended to inform children about the dangers of substance abuse. Additionally, all four of the Turtles were official “spokes-turtles” of the “Just Say No” anti-drug campaign, despite accusations that at least one of them exhibited characteristics of a stoner. During one of these anti-drug PSAs, Michelangelo suggests to a kid being tempted with marijuana that he should “get a pizza” to go with it, before the idea is shot down by Donatello. Michelangelo’s trademark phrase in this series is the famous “Cowabunga”. 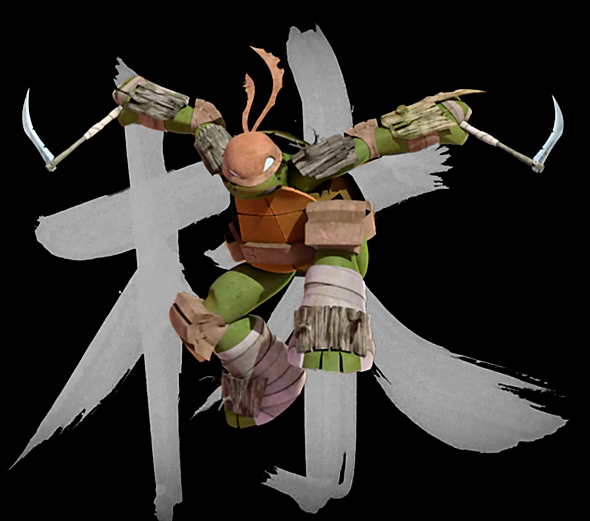 Cooking Skills: He shows to love to cook for his family even though his brothers don’t think his tastes great but to Mikey it does. Leatherhead seems to love his cooking skills. (Probably because he has never eaten anything delicious)
Intelligence and Communication : He not the smartest of like his brothers are but he makes it up for knowing comics and naming creatures. As he shown to be excellent naming creatures if their appearance, abilities or powers. Just like any other creature mutated of humanoids able to speak. He also use his comic intelligence to defeat the mutation Squirrels and true genius in Dimension X. He is typically smarter than his brothers believe him to be, for he is capable of creating antidotes and retro-mutagen from random ingredients, though his brothers continue to doubt his intelligence for obvious reasons for example when Mikey sprinkled botched retro-mutagen onto his skin when Donnie had clearly labelled it as being dangerous.

Michelangelo, better known as Mikey, is one of the four humanoid turtles in the Teenage Mutant Ninja Turtles (TMNT) franchise. He is easily recognized in the company of his brothers, Leonardo, Donatello and Raphael, as the playful and fun-loving Ninja Turtle who wears an orange mask.
Although Michelangelo’s reputation as the fun-loving member of the team was established in the original comic books, changes to the character in the 1987 animated TV series to incorporate childlike traits played a key role in launching the Teenage Mutant Ninja Turtles to worldwide fame. The cartoon series targeted a younger audience than the original comic books, thus the creators tweaked the character to emphasize traits they thought would appeal to a younger audience. 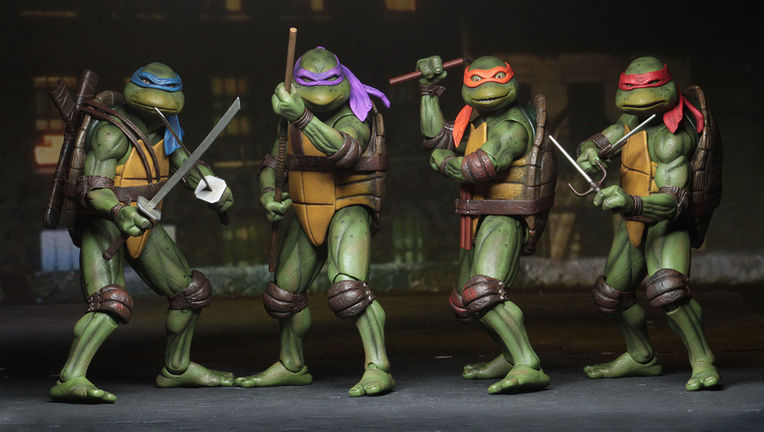 The turtle’s trip coincided with a month-long exhibit dedicated to his namesake, artist Michelangelo Buonarroti, called Michelangelo: Divine Draftsman and Designer. And judging by the photos, Michelangelo loved what he saw of the artist’s work. Or maybe he just liked seeing his name in really big letters.
Before he jumps back into action later this year in the new Nickelodeon TMNT animated series, one of our favorite pizza-loving, New York City sewer-dwellers left his nunchucks at home and took a quiet visit to the Metropolitan Museum of Art, where he visited a special exhibit relevant to his interests. The once-in-a-lifetime exhibition has been a smash success for the Met, attracting half a million visitors as of this week, with an average of 7,000 art lovers swarming the exhibition every day, according to an announcement from the museum. That puts it on track to be one of the institution’s top 10 most-visited shows ever before it closes on February 12.
Teenage Mutant Ninja Turtle Michelangelo visits the Metropolitan Museum of Art on Thursday, January 25, 2018. Photo by Rebecca Schear, courtesy of the Metropolitan Museum of Art.