Duchamp’s rigorous intellectualism was hermetic but because of the theory of the “talking cure” based on hearing clues and reading codes, Surrealism expected audience participation. Duchamp himself had no aesthetic intentions, even when he “assisted” or “rectified” his Readymades, but the Surrealists returned to the aestheticism of art, making desirous and desiring works to be looked at and into. Although inherently conservative, Surrealism dominated the Parisian art scene until the next war broke out, scattering the already dated movement to distant shores where, like Dada, Surrealism would find a different and new destiny. As André Breton said, “Surrealism existed before me, and I firmly believe it will survive me.”
The extent to which the Surrealist artists understood the theories of Sigmund Freud is debatable but their interest in Freud should be distinguished from Dada’s anti-rational stance. Although Surrealism supposedly celebrated the irrational, their ideas were based upon Freud’s very rational model of the human mind, bisected into the conscious and the unconscious mind and mapped into the id, the ego, and the superego. Surrealism also rejected the Dada disgust with self-indulgent expressionism but returning to individual vision, but the site of this vision was the untapped unconscious mind. In contrast to the deliberately disruptive and antagonistic tactics of the Dada artists, the Surrealists sought what they called “the Marvelous,” or that magically unexpected encounter when the ordinary suddenly became extraordinary.

Dada was an art movement of the European avant-garde in the early 20th century, with early centers in Zürich, Switzerland and in New York. Developed in reaction to World War I, the Dada movement consisted of artists who rejected the logic, reason, and aestheticism of modern capitalist society, instead expressing nonsense, irrationality, and anti-bourgeois protest in their works. The art of the movement spanned visual, literary, and sound media, including collage, sound poetry, cut-up writing, and sculpture. Dadaist artists expressed their discontent with violence, war, and nationalism, and maintained political affinities with the radical left.
‘Fountain’ by Marcel Duchamp (replica), Scottish National Gallery of Modern Art, Edinburgh 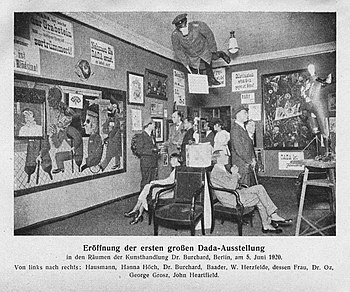 As Hugo Ball expressed it, “For us, art is not an end in itself . but it is an opportunity for the true perception and criticism of the times we live in.” [17]
While broadly based, the movement was unstable. By 1924 in Paris, Dada was melding into Surrealism, and artists had gone on to other ideas and movements, including Surrealism, social realism and other forms of modernism. Some theorists argue that Dada was actually the beginning of postmodern art. [58]

International in scope and diverse in artistic output, both Dada and Surrealism were artistic, literary and intellectual movements of the early 20th century that were instrumental in defining Modernism. The Dada movement, launched in 1916 in Zurich by poets and artists such as Tristan Tzara and Hans Arp, was a direct reaction to the slaughter, propaganda and inanity of World War I. Independent groups linked by common ideas sprung up soon afterwards in New York, Berlin, Paris and elsewhere. These various groups did not share a universal style, but rather were connected by their rejection of idealism, stale artistic and intellectual conventions and modern society’s unchecked embrace of ‘rationalism’ and ‘progress’. They condemned the nationalist and capitalist values that led to the cataclysm of the war and employed unorthodox techniques, performances and provocations to jolt the rest of society into self-awareness. The absurdity of Dada activities created a mirror of the absurdity in the world around them. Dada was anti-aesthetic, anti-rational and anti-idealistic. Key figures such as Marcel Duchamp disturbed the art world with his ready-mades such as Fountain (which is simply a urinal). Dada’s challenge to conventional notions of ‘high art’ radically impacted later developments in conceptual art, performance art and post-modernism among others.