The above painting is a picture on a tomb wall of Queen Nefertari, wife of Ramses the Great.
Interesting Facts about Ancient Egyptian Art

29th Dynasty (399-380 BCE)
The medium was water to which gum was sometimes added, and the paint was applied in areas of flat colour. During the New Kingdom delicate effects were achieved by using tiny strokes of the brush or pen to pick out animal fur or the fluffy heads of papyrus reeds. Shading was rarely used until the mid-18th Dynasty, when it was employed, particularly in crowd scenes, to suggest the fine pleating of linen garments.

A Greek artist like Phidias (c. 490-430 BCE) certainly understood the practical purposes in creating a statue of Athena or Zeus but his primary aim would have been to make a visually pleasing piece, to make ‘art’ as people understand that word today, not to create a practical and functional work. All Egyptian art served a practical purpose: a statue held the spirit of the god or the deceased; a tomb painting showed scenes from one’s life on earth so one’s spirit could remember it or scenes from the paradise one hoped to attain so one would know how to get there; charms and amulets protected one from harm; figurines warded off evil spirits and angry ghosts; hand mirrors, whip-handles, cosmetic cabinets all served practical purposes and ceramics were used for drinking, eating, and storage. Egyptologist Gay Robins notes:
A sword or a cosmetic case was designed and created with this same goal in mind: story-telling. Even the garden of a house told a story: in the center was a pool surrounded by trees, plants, and flowers which, in turn, were surrounded by a wall and one entered the garden from the house through a portico of decorated columns. All of these would have been arranged carefully to tell a tale which was significant to the owner. Although Egyptian gardens are long gone, models made of them as grave goods have been found which show the great care which went into laying them out in narrative form. 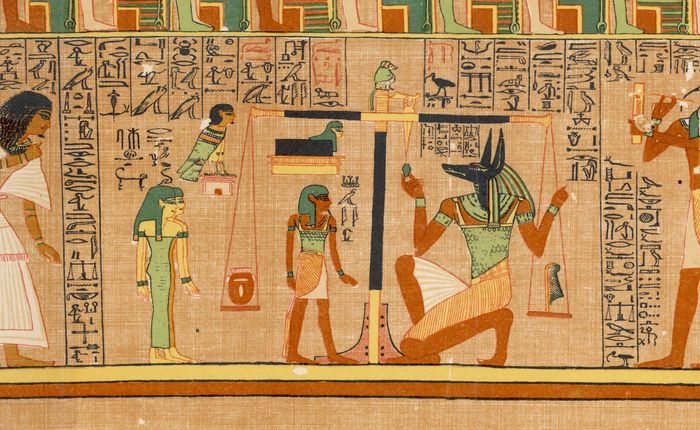 The word paper is derived from “papyrus”, a plant which was cultivated in the Nile delta. Papyrus sheets were derived after processing the papyrus plant. Some rolls of papyrus discovered are lengthy, up to 10 meters. The technique for crafting papyrus was lost over time, but was rediscovered by an Egyptologist in the 1940s.
Isis was revered as an emblem of motherhood and protector of young children. Possibly due to the shift of political power to the Delta, where in myth Isis raised Horus in secret, the cult of Isis and the child Horus strengthened from the Third Intermediate period onward, and during the Greco-Roman period spread widely through the ancient world. After the Emperor Constantine had made Christianity the official religion of the Roman Empire, the mother-child image formerly attached to Isis and Horus reemerged in representations of the Virgin and Child.