Known as the “Birth of Venus”, the composition actually shows the goddess of love and beauty arriving on land, on the island of Cyprus, born of the sea spray and blown there by the winds, Zephyr and, perhaps, Aura. The goddess is standing on a giant scallop shell, as pure and as perfect as a pearl. She is met by a young woman, who is sometimes identified as one of the Graces or as the Hora of spring, and who holds out a cloak covered in flowers. Even the roses, blown in by the wind are a reminder of spring. The subject of the painting, which celebrates Venus as symbol of love and beauty, was perhaps suggested by the poet Agnolo Poliziano.
It is highly probable that the work was commissioned by a member of the Medici family, although there is nothing written about the painting before 1550, when Giorgio Vasari describes it in the Medici’s Villa of Castello, owned by the cadet branch of the Medici family since the mid-15th century. This hypothesis would seem to be born out by the orange trees in the painting, which are considered an emblem of the Medici dynasty, on account of the assonance between the family name and the name of the orange tree, which at the time was ‘mala medica’.

Alessandro di Mariano di Vanni Filipepi (c. 1445 [1] – May 17, 1510), known as Sandro Botticelli ( / ˌ b ɒ t ɪ ˈ tʃ ɛ l i / , Italian: [ˈsandro bottiˈtʃɛlli] ), was an Italian painter of the Early Renaissance. He belonged to the Florentine School under the patronage of Lorenzo de’ Medici, a movement that Giorgio Vasari would characterize less than a hundred years later in his Vita of Botticelli as a “golden age”. Botticelli’s posthumous reputation suffered until the late 19th century; since then, his work has been seen to represent the linear grace of Early Renaissance painting.
A large fresco for the customs house of Florence, that is now lost, depicted the execution by hanging of the leaders of the Pazzi conspiracy of 1478 against the Medici. It was a Florentine custom to humiliate traitors in this way, by the so-called “pittura infamante“. [27] This was Botticelli’s first major fresco commission (apart from the abortive Pisa excursion), and may have led to his summons to Rome. The figure of Francesco Salviati, Archbishop of Pisa was removed in 1479, after protests from the Pope, and the rest were destroyed after the expulsion of the Medici and return of the Pazzi family in 1494. [28] Another lost work was a tondo of the Madonna ordered by a Florentine banker in Rome to present to Cardinal Francesco Gonzaga; this perhaps spread awareness of his work to Rome. A fresco in the Palazzo Vecchio, headquarters of the Florentine state, was lost in the next century when Vasari remodelled the building. [29]

These transitions in Botticelli’s style can be seen in the small panels of Judith (The Return of Judith) and Holofernes (The Discovery of the Body of Holofernes), both c. 1470, and in his first dated work, Fortitude (1470), which was painted for the hall of the Tribunale dell’Are della Mercanzia, or merchants’ tribunal, in Florence. Botticelli’s art from that time shows a use of ochre in the shadowed areas of flesh tones that gives a brown warmth very different from Lippi’s pallor. The forms in his paintings are defined with a line that is at once incisive and flowing, and there is a growing ability to suggest the character and even the mood of the figures by action, pose, and facial expression.
After Lippi left Florence for Spoleto, Botticelli worked to improve the comparatively soft, frail figural style he had learned from his teacher. To this end he studied the sculptural style of Antonio Pollaiuolo and Andrea del Verrocchio, the leading Florentine painters of the 1460s, and under their influence Botticelli produced figures of sculptural roundness and strength. He also replaced Lippi’s delicate approach with a robust and vigorous naturalism, shaped always by conceptions of ideal beauty. Already by 1470 Botticelli was established in Florence as an independent master with his own workshop. Absorbed in his art, he never married, and he lived with his family. However, although he was famous during his lifetime, Botticelli’s reputation suffered after his death for several centuries. Perhaps because Botticelli’s work remained rooted in a Medieval tradition that was forsaken during the High Renaissance, his work was dismissed along with Gothic art. So-called because it was thought at the time to be influenced by the Goths and the Vandals, who were considered to be uncultured. Another theory speculates that Botticelli’s career suffered after the Medicis were forced to leave Florence, and power was usurped for a time by conservative Christian influences that denounced the decadence of the former rulers and the artists they patronised.
In 1472, Botticelli’s position allowed him to join the group of Florentine painters called the Compagnia di San Luca. His early work in this period was produced for churches in Florence, including his Adoration of the Magi (c.1476) for Santa Maria Novella, one of the city’s most important religious spaces. The painting contains portraits of Cosimo de’ Medici, and his sons Piero and Giovanni, along with other members of the Medici family. In addition to these, the painting is thought to include the only known self-portrait by the artist. 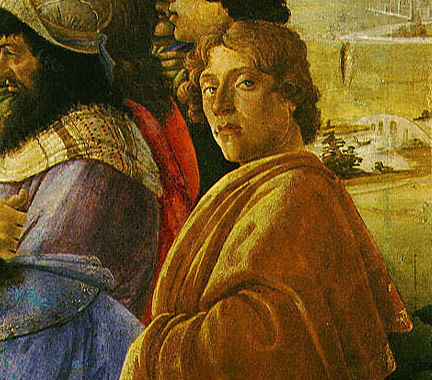 At the height of his fame, the Florentine painter and draughtsman Sandro Botticelli was one of the most esteemed artists in Italy. His graceful pictures of the Madonna and Child, his altarpieces and his life-size mythological paintings, such as ‘Venus and Mars’, were immensely popular in his lifetime.
Botticelli’s star was in the ascendant. Such was his reputation that, in 1481, he was summoned by the Pope to Rome to help decorate the walls of the recently completed Sistine Chapel in the Vatican. He painted frescoes depicting scenes from the Life of Moses and the Temptations of Christ and was also responsible for a number of papal portraits. The nature of this task demonstrates how highly regarded he was around this time, and it was the only occasion he is known to have worked outside Florence.