Thousands of books and works of art were publicly burned. It is possible that Botticelli threw some of his own “pagan” themed paintings into the flames.
Botticelli was a recognised star of his time and spent much of his life working for the Medici family and their large and influential group of friends. They commissioned many works from him, including the Birth of Venus, 1485, which are now recognised as masterpieces.

Prince Bartolomeo Corsini [1729-1792], Villa di Mezzomonte, near Florence, by 1763;[1] by inheritance to Prince Tommaso Corsini [1767-1856]; by inheritance to Prince Andrea Corsini [1804-1868]; by inheritance to Prince Tommaso Corsini [1835-1919], who in the early 1870s had it transferred to Palazzo Corsini in Via del Parione, Florence;[2] by inheritance to his daughter, Beatrice Corsini Pandolfini [1868-1955]; (Professor Luigi Grassi [1858-1937, Florence); sold August 1930 to (Duveen Brothers, Inc., London and New York);[3] purchased 15 December 1936 by The A.W. Mellon Educational and Charitable Trust, Pittsburgh;[4] gift 1937 to NGA.
[1] The inventory of the Villa di Mezzomonte, dated 1763 (Archivio Corsini, stanza VI, arm. 4, no. 14), describes in the first room on the lawn side, “un tabernacolo intagliato e dorato in parte e parte tinto di verde entrovi la S.ma Vergine con Gesu Bambino. Dipinto su asse” (“a tabernacle in part inlaid and gilded and in part painted green, containing the Holy Virgin and the Child Jesus. Painted on board”). In the transcription of the inventory done by Tommaso Corsini, an annotation indicates that the painting is “oggi in Galleria” (“now in the Gallery”). According to Ulderico Medici, Catalogo della Galleria dei Principi Corsini in Firenze, Florence, 1880: 65, the painting was moved to Palazzo Corsini in Via del Parione from a Corsini family villa in 1870. Perhaps this is only an approximate date; in any case, in the “Prospetto della corrispondenza dei diversi inventari (secondo l’ordine dei quadri nel 1872)” (“Outline of the corresondence between the various inventories [following the order of the pictures in 1872]”) (Archivio Corsini, stanza VI, arm. 4, no. 74), lists “no. 3 Lippi (?). Madonna a tabernacolo. 1864 Mezzomonte” (“Madonna in a tabernacle. 1864 [meaning that in this year the painting was still preserved there]).” The painting is not yet listed in the 1727 inventory of that villa.

The Virgin Mary, crowned by two angels, is depicted on a throne. Under the guidance of her son, she is writing the canticle “Magnificat anima mea Dominum” (My soul doth magnify the Lord), which gives the painting its title. Jesus is sitting in his mother’s lap. He is touching a pomegranate, a fruit with many symbolic meanings, and whose red seeds recall the blood shed by Jesus to save humankind. The scene takes place before a window that opens out onto a bright, peaceful country landscape; above, the Serena stone frame creates a division between the kingdom of Heaven and the earth. The religious theme becomes almost temporal in the fashionable, elegant hairstyles of Mary and the angels, who, as in various other works by Botticelli, are without wings. The Virgin’s blonde hair with bright gold finish is covered by transparent veils under a richly decorated maphorion, while the hairstyles and clothing of the angels are based on the fashions followed by the scions of the rich Florentine families of the late 15th century. The originality of the work, together with the sophisticated elegance of the clothing and hair, and the grace of Mary’s engrossed expression, have, over the years, brought renown to the invention of Botticelli, whose figures embody an ideal of beauty that was greatly appreciated during the 20th century.
We don’t know the original destination of the painting, which was purchased from a private collection in 1784. Round paintings were usually destined to the secular world in the Renaissance, and above all to noble homes. They were often commissioned on the occasion of marriages or births. However, in the light of the considerable size of the painting, it may have been hung in one of the tribunals of the Florentine Republic, which were often decorated with holy images.

These transitions in Botticelli’s style can be seen in the small panels of Judith (The Return of Judith) and Holofernes (The Discovery of the Body of Holofernes), both c. 1470, and in his first dated work, Fortitude (1470), which was painted for the hall of the Tribunale dell’Are della Mercanzia, or merchants’ tribunal, in Florence. Botticelli’s art from that time shows a use of ochre in the shadowed areas of flesh tones that gives a brown warmth very different from Lippi’s pallor. The forms in his paintings are defined with a line that is at once incisive and flowing, and there is a growing ability to suggest the character and even the mood of the figures by action, pose, and facial expression.
Sandro Botticelli’s father apprenticed him to a goldsmith after his schooling was finished. But, since Sandro preferred painting, his father placed him under Filippo Lippi, who was one of the most admired Florentine masters. By 1470 Botticelli had established himself in Florence as an independent master with his own workshop. 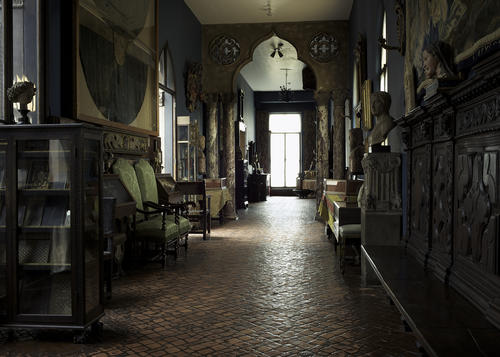