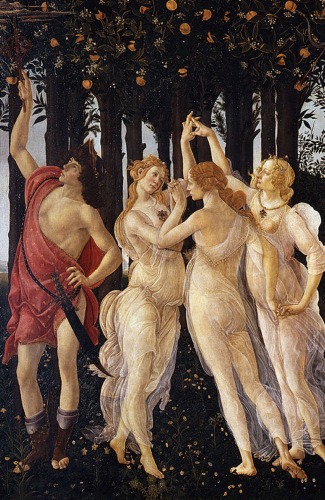 To the far left, Mercury, the god of the month of May, has a staff which he may be using to usher away the winter clouds. He is readily identifiable by his prominent winged sandals.
Sandro Botticelli was one of the most well-known of the Medici employees. He studied under Fra Filippo Lippi and had a technique which focused on line, and his forms were lightly shaded. While art historians consider Botticelli to have been an expert at using line, he was also adept at using color. 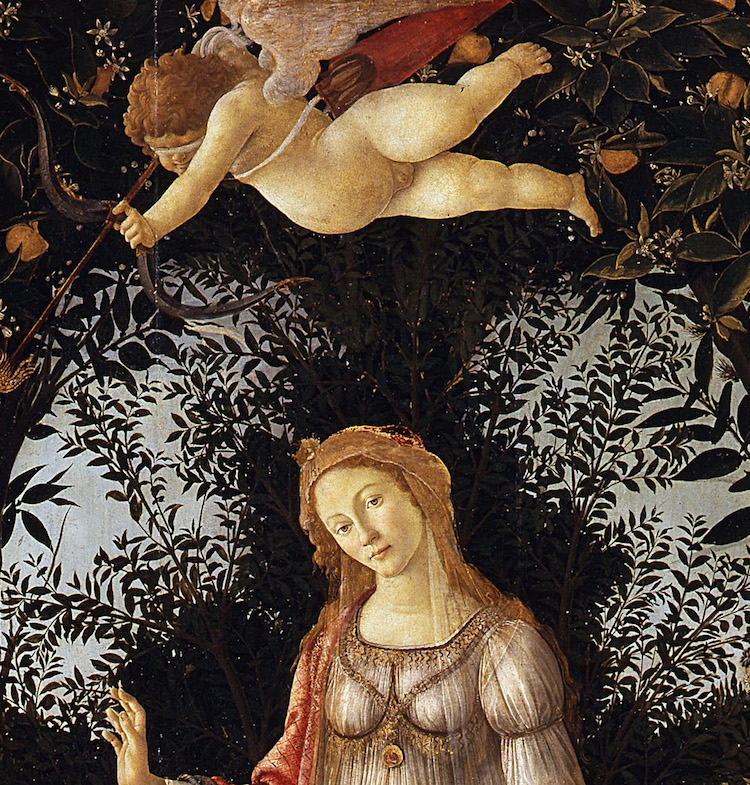 This painting, usually known as the Primavera [or ‘Spring’] shows nine figures from classic mythology advancing over a flowery lawn in a grove of orange and laurel trees. In the foreground, to the right, Zephyrus embraces a nymph named Chloris before taking her; she is then portrayed after her transformation into Flora, the spring goddess. The centre of the painting is dominated by the goddess of love and beauty, Venus, chastely dressed and set slightly back from the others, and by a blindfolded Cupid, firing his arrow of love.
Although the complex meaning of the composition remains a mystery, the painting is a celebration of love, peace, and prosperity. The dark colour of the vegetation is in part due to the ageing process of the original pigment, but is lightened by the abundance of fruits and flowers. At least 138 species of different plants have been identified, all accurately portrayed by Botticelli, perhaps using herbaria. The attention to detail confirms the artist’s commitment to this piece, which is also evident in the sheer skill with which the paint has been applied. 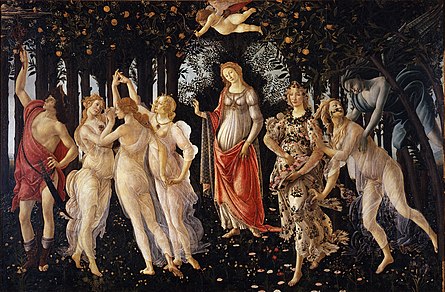 In the same room was Botticelli’s Pallas and the Centaur, and also a large tondo with the Virgin and Child. The tondo is now unidentified, but is a type of painting especially associated with Botticelli. This was given the highest value of the three paintings, at 180 lire. A further inventory of 1503 records that the Primavera had a large white frame. [57]
Where there is a plethora of literary sources, most of them probably not known directly by Botticelli, or set out for him by advisors, the visual sources are a different matter: