If, as Smith argues, John Herbert’s Sir Thomas More and his Daughter (1844, Tate) was the very first nineteenth-century visual response to The Arnolfini Portrait why was this work not included in the exhibition (see p.30)? We may speculate its absence was due to its lack of a mirror, although it would have made an interesting addition as it is not a well-known work. Another work, again one without a mirror, that would have added greater nuance is Hunt’s Henry Wentworth Monk (1858, Ottawa). It would have been interesting to place this alongside van Eyck’s LГ©al Souvenir (1433, National Gallery). Whether these absences were deliberate or not, it is clearly the reception of the mirror that has preoccupied Smith and Foister in their selection.
Landow, G. P. Replete withMeaning: William Holman Hunt and Typological Symbolism . London: Paul Mellon Centre, 1979. [ Victorian Web book: click here to access this electronic edition.] 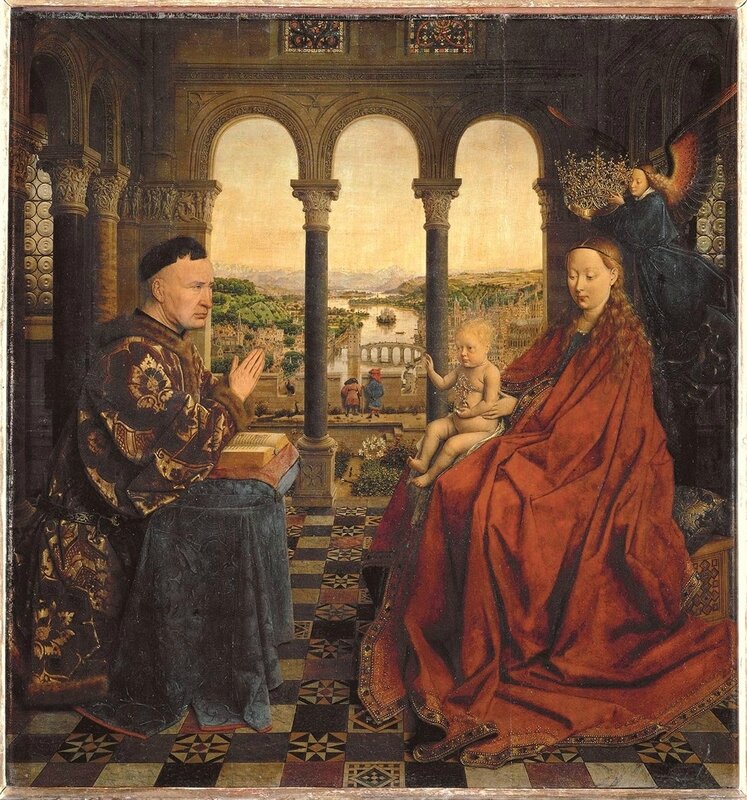 John Phillip, Partial copy of ‘Las Meninas’, 1862. Oil on canvas, 72 4/5 × 58 3/10 in; 185 × 148 cm © Royal Academy of Arts, London.
The convex mirror, which in ‘The Arnolfini Portrait’ famously shows a reflection of van Eyck himself, left a lasting impression on the Pre-Raphaelites. They adapted the device as a means of exploring ideas of distortion, doubling, and reflection, but also as a way to convey a complex psychological drama. The exhibition brings together paintings featuring this artistic device, including Hunt’s ‘Awakening Conscience’ (1853, Tate), which depicts a woman and her lover – here the mirror is used to reflect a view out of the window, an allusion to the woman’s possible redemption from a life of shame. Many of the Pre-Raphaelite Brotherhood’s paintings feature female figures in interior scenes that incorporate the mirror device, such as Rossetti’s ‘Lucrezia Borgia’ (1860–1, Tate) and Holman Hunt’s ‘Il Dolce far Niente’ (1866, Private Collection).

The couple stand within a domestic interior for this is a secular painting, one which is vastly different from the religious images the National Gallery had up until that point been collecting. The domestic symbolism and the realism of the painting, as well as its pristine condition, excited the Victorians. We could spend hours discussing the beautifully rendered dog, or the dirty wooden pattens, or even the window for these many finely considered verisimilitudes are what make the painting so interesting, and what continue to make art historians and viewers alike ask questions.
This painting shares the liminal atmosphere which Burne-Jones is now famous for but it also demonstrates the growing fashion for the middle-class purchase of mass produced van Eyckian mirrors. In terms of middle-class domesticity the Margaret painting recalls Henry Treffry Dunn’s watercolour of Dante Gabriel Rossetti’s Bedroom at Tudor House, 16 Cheyne Walk (1872, Wightwick Manor). Rather than the dark domestic future awaiting Margaret, Rossetti’s domestic space is an aesthetic one as exemplified by the blue and white porcelain, the Chinese bronzes and peacock feathers. The division between early Pre-Raphaelite interests in Christian narratives was by this time replaced within a secular space that further validated the mining of the Arnolfini Portrait.

Выполните вход, чтобы сообщить о неприемлемом контенте.
This exhibition is organised by the National Gallery in collaboration with Tate Britain.

Van Eyck’s Arnolfini forms the core of the exhibition. Secondary is the supporting influence of other paintings from the Low Countries which entered the National around the same time. A reduced scale copy of the Ghent altarpiece by Van Eyck and his brother Hubert is included to highlight that the original was on show in London circa 1819, implying its exposure to the Brotherhood. Van Eyck’s self-portrait arrived in 1933. Its caption stating “As I can” is consciously borrowed by Morris for the frame of his “La Belle Iseult”.
These formal qualities are profoundly evident here in the hallucinogenic riotous colors and almost hyperreal detail of Holman Hunt’s “Awakening Conscience” (1853) and “Lady of Shalott” (about 1886–1905). They also adopted the obtuse symbolism contained within the Arnolfini, as well as explicit citations of domestic objects. The Brotherhood chose religious and literary themes, filling humble domestic interiors with objects weighted with significance. Millais’s “Mariana” (1851), based on Tennyson’s poem, through a single burning candle, solitary bed and desk, shows the conflicted mentality of desire and penitence in this jilted bride. And Morris’s “La Belle Iseult” (1858-7), from the Tristram and Iseult legend, clearly borrows the Arnolfini’s bed, carpet, oranges, dog, mirror, and slippers.