Something to take into consideration: When white is added to a color to lighten it, we usually call it by the name of the original color. Blue becomes light blue, or pale blue, but it is still blue. However, black becomes not light black but gray, and red becomes not pale red but pink. So these Gustons are not pink but red paintings.
-Ianthe Gergel, Museum Assistant

Kathy Butterly
No vessel emerges in its traditional configuration when Kathy Butterly is finished with her clay sculptures. Dare and Carnivorous are some typical titles in her show opening today at Tibor de Nagy, filled with frisky ceramic forms that appear to have started their lives as cups or vases, only to be smushed at the last moment, wrangled until their insides are showing, and prettied up with glaze—much of it pink. They look delicate, but don’t mess with them.
COURTESY CHEIM & READ, NEW YORK. PHOTO: BRIAN BUCKLEY. Grouped together, the three paintings seem to form a single line of thought, as the black shapes, one per canvas and located pretty much in the same spot, bob and weave from one image to the next. The effect is almost like reading a comic strip, such as George Herriman’s Krazy Kat cartoons (another prefiguring of things to come), in which the action often takes place in a single, unchanging setting.
Philip Guston, “Reverse” (1965), oil on canvas, 69 1/8 x 79 inches. Private collection. 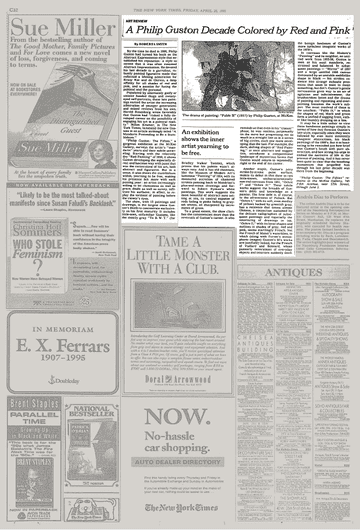 Another staple, Guston’s juicy stroke-by-stroke paint surface, makes its debut in this show in two little-known, uncharacteristically non-red canvases from 1951, “Ochre I” and “Ochre II.” These subtle works suggest the breadth of Guston’s debts and knowledge as a painter. The first debt is, of course, to the all-overness of Pollock. But “Ochre I,” with its soft, even medley of yellows backed by greenish gray, has a reticence that seems almost Chinese, a connection sustained by the delicate calligraphies of subsequent paintings and especially the smattering of drawings in ink. “Ochre II,” with its loose shapes and outlines in shades of gray, red and pink, seems startlingly French. Not the French of Monet’s waterlilies, to which (along with Turner’s atmospheric images) Guston’s 50’s works are justifiably linked, but the French of Vuillard and Bonnard, whose painterly reiterations of everyday objects and interiors suddenly seem the benign forebears of Guston’s more turbulent imagistic works of the 1970’s.
Populated by alternately goofy or sinister hooded thugs and sweaty-eyed self-portraits, these late paintings earned the artist the increasing admiration of younger generations and mixed reviews from his own. Harold Rosenberg wrote favorably that Guston had “risked a fully developed career on the possibility of engaging his art in a political reality.” Hilton Kramer, in The New York Times, lamented the new Gustons in an article strikingly titled “A Mandarin Pretending to Be a Stumblebum.”

Pinkstinks: that is the name and the slogan of a campaign, launched last year, opposing the dominance of pink in the lives of little girls. The campaigners observed that it is hard to buy girls clothes or toys that are not in some shade of rose, peach or fuchsia. And this uniform, they argued, offers girls the most self-undermining ideals: a girly, sugary, pretty-pretty, passive, flirty image which prepares them for a life of hairdressing and lapdancing.
In Christianity, deep blue is the colour of the Virgin Mary, while the Great Whore of Revelation is “arrayed in purple and scarlet colour”: both female, neither girly. But the pinks of contemporary little girlhood are, arguably, sexualising. Like lipstick? It’s a complicated area.