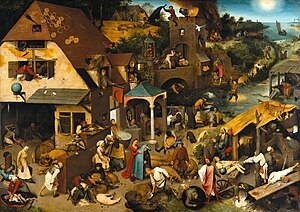 Bruegel himself had painted several minor paintings on the subject of proverbs including Big Fish Eat Little Fish (1556) and Twelve Proverbs (1558), but Netherlandish Proverbs is thought to have been his first large-scale painting on the theme.
Running themes in Bruegel‘s paintings are the absurdity, wickedness and foolishness of humans, and this is no exception. The painting’s original title, The Blue Cloak or The Folly of the World, indicates that Bruegel‘s intent was not just to illustrate proverbs, but rather to catalog human folly. Many of the people depicted show the characteristic blank features that Bruegel used to portray fools. [1]

Pieter Bruegel the Elder – Netherlandish Proverbs (1559), oil on oak panel
With his keen understanding of the human condition and his appreciation for nature, Pieter Bruegel the Elder captured the daily life of peasants with satire, humor and sympathy. Although he was less moralizing and more anchored in reality, you can still notice Hieronymus Bosch’s influence in his art. Bruegel died young, when he was around 40 years old, but his legacy is everlasting, having shaped generations of Dutch and Flemish artists.

All his most famous paintings come from the decade before his early death. He was in his early forties, and at the height of his powers. He dropped the ‘h’ from his name and signed his paintings as Bruegel. He is sometimes referred to as “Peasant Bruegel,” to distinguish him from the many later painters in his family, including his son Pieter Brueghel the Younger (1564-1638).
Pieter Bruegel (also Brueghel) the Elder was the most significant artist of Dutch and Flemish Renaissance painting, a painter known for his landscapes and peasant scenes. He influenced the Dutch Golden Age painting with his innovative choices of subject matter. He was one of the first generations of artists to grow up when religious subjects had ceased to be the dominant subject matter of painting.

Proverbs were very popular in Bruegel‘s time and before, and Dutch and Flemish authors of the era used them generously in their works. In year 1500, more than fifty years before Netherlandish Proverbs, the Dutch humanist Desiderius Erasmus published a volume called Adagia, where he compiled more than eight hundred Greek and Latin proverbs. Eight years later, he had expanded the collection to more than three thousand proverbs. The work continued to expand, and by the time Eramus died in 1536, his collection had grown to over four thousand entries. Erasmus’ collection of proverbs remains one of the most monumental ever assembled.
Hanging at the Gemäldegalerie art museum in Berlin, Germany, is an unusual painting. Measuring 64 inches by 46 inches, this 16th century oil-on-oak-panel painting is populated by a swarm of miniature men, women, children and animals performing a range of extraordinary and bizarre acts—two men defecating out of a window, a man biting into a wooden pillar, another man banging his head against a wall, a man burying a calf, a man attempting to scoop up spilled porridge, and a woman tying into a bundle what appears to be the devil. 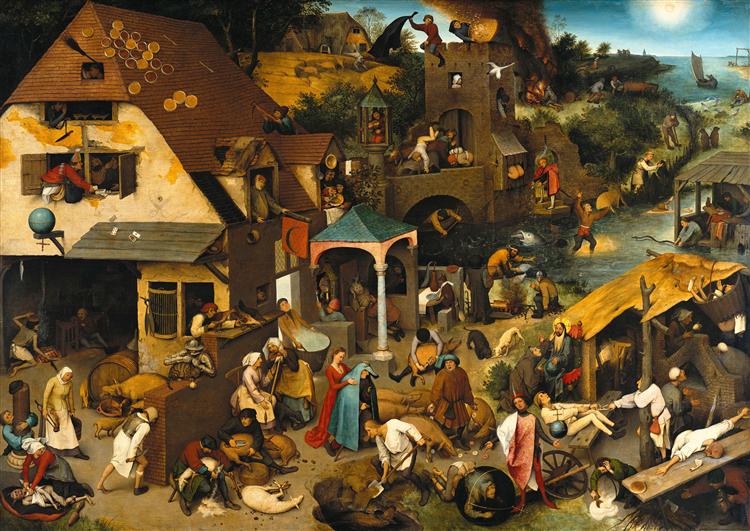 The Blue Cloak, the piece’s original title, features in the centre of the piece and is being placed on a man by his wife, indicating that she is cuckolding him. Other proverbs indicate human foolishness. A man fills in a pond after his calf has died. Just above the central figure of the blue-cloaked man another man carries daylight in a basket. Some of the figures seem to represent more than one figure of speech (whether this was Bruegel‘s intention or not is unknown), such as the man shearing a sheep in the centre bottom left of the picture. He is sitting next to a man shearing a pig, so represents the expression “One shears sheep and one shears pigs”, meaning that one has the advantage over the other, but may also represent the advice “Shear them but don’t skin them”, meaning make the most of available assets.
Critics have praised the composition for its ordered portrayal and integrated scene. There are approximately 112 identifiable proverbs and idioms in the scene, although Bruegel may have included others which cannot be determined because of the language change. Some of those incorporated in the painting are still in popular use, for instance “Swimming against the tide”, “Banging one’s head against a brick wall” and “Armed to the teeth”. Many more have faded from use, which makes analysis of the painting harder. “Having one’s roof tiled with tarts”, for example, which meant to have an abundance of everything and was an image Bruegel would later feature in his painting of the idyllic Land of Cockaigne (1567).