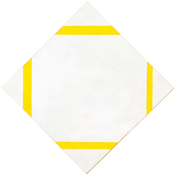 В«Vertical and horizontal lines are the expression of two opposing forces; they exist everywhere and dominate everything; their reciprocal action constitutes life. I recognized that the equilibrium of any particular aspect of nature rests on the equivalence of its opposites.В» (Mondrian)
A brief analysis of these four composition allows to focus on a lifetime evolution from black lines (Pier and Ocean 4) to colored planes (Victory Boogie Woogie), that is to say, from drawing to painting. On observing this square and contemplating the differing thickness of the lines, we are faced with a unity undergoing transformation from one side to the other. We see a unitary synthesis that already appears comparatively manifold in itself. We perceive a changing unity that tends to become rather than to be. It endures but changes at the same time. In Lozenge Composition with Four Yellow Line we encounter a square that is open, dynamic, asymmetric, and full of color.
Lozenge Composition with Four Yellow Line goes to the heart of the problem: to show the manifold in unitary form; to open up unity, i.e. the postulate of consciousness, to the changing aspect of the natural universe and existence in time but without losing sight of it. This is a fundamental issue. The one and the many appear as antithetical realities in the human dimension; in actual fact, they are the same thing.

Pieter Cornelis Mondriaan (Dutch: [ˈpitər ˈmɔndrijaːn] ), after 1906 Piet Mondrian ( / p iː t ˈ m ɒ n d r i ɑː n / , [1] [2] also US: /- ˈ m ɔː n -/ , [3] [4] Dutch: [pit ˈmɔndrijɑn] ; 7 March 1872 – 1 February 1944), was a Dutch painter and theoretician who is regarded as one of the greatest artists of the 20th century. [5] [6] He is known for being one of the pioneers of 20th-century abstract art, as he changed his artistic direction from figurative painting to an increasingly abstract style, until he reached a point where his artistic vocabulary was reduced to simple geometric elements. [7]
In 1926, Katherine Dreier, co-founder of New York City’s Society of Independent Artists (along with Marcel Duchamp and Man Ray), visited Piet Mondrian‘s studio in Paris and acquired one of his diamond compositions, Painting I. This was then shown during an exhibition organized by the Society of Independent Artists in the Brooklyn Museum–the first major exhibition of modern art in America since the Armory Show. She stated in the catalog that “Holland has produced three great painters who, though a logical expression of their own country, rose above it through the vigor of their personality – the first was Rembrandt, the second was Van Gogh, and the third is Mondrian.” [26] In the 1920s, Mondrian began to create the definitive abstract paintings for which he is best known. He limited his palette to white, black, gray, and the three primary colors, with the composition constructed from thick, black horizontal and vertical lines that delineated the outlines of the various rectangles of color or reserve. The simplification of the pictorial elements was essential for Mondrian’s creation of a new abstract art, distinct from Cubism and Futurism. The assorted blocks of color and lines of differing width create rhythms that ebb and flow across the surface of the canvas, echoing the varied rhythm of modern life. The composition is asymmetrical, as in all of his mature paintings, with one large dominant block of color, here red, balanced by distribution of the smaller blocks of yellow, blue gray, and white around it. This style has been quoted by many artists and designers in all aspects of culture since the 1920s.
Oil on canvas – State Museum Kroller-Muller, Otterlo

Mondrian in his Paris studio in 1933 with Lozenge Composition with Four Yellow Lines, 1933 and Composition with Double Lines and Yellow, 1933 © 2014 Mondrian/Holtzman Trust c/o HCR International USA
Can you see the shape of a tree in this painting? It shows how he began to develop his abstract style. The trunk and branches of the tree have become a network of horizontal and vertical lines.