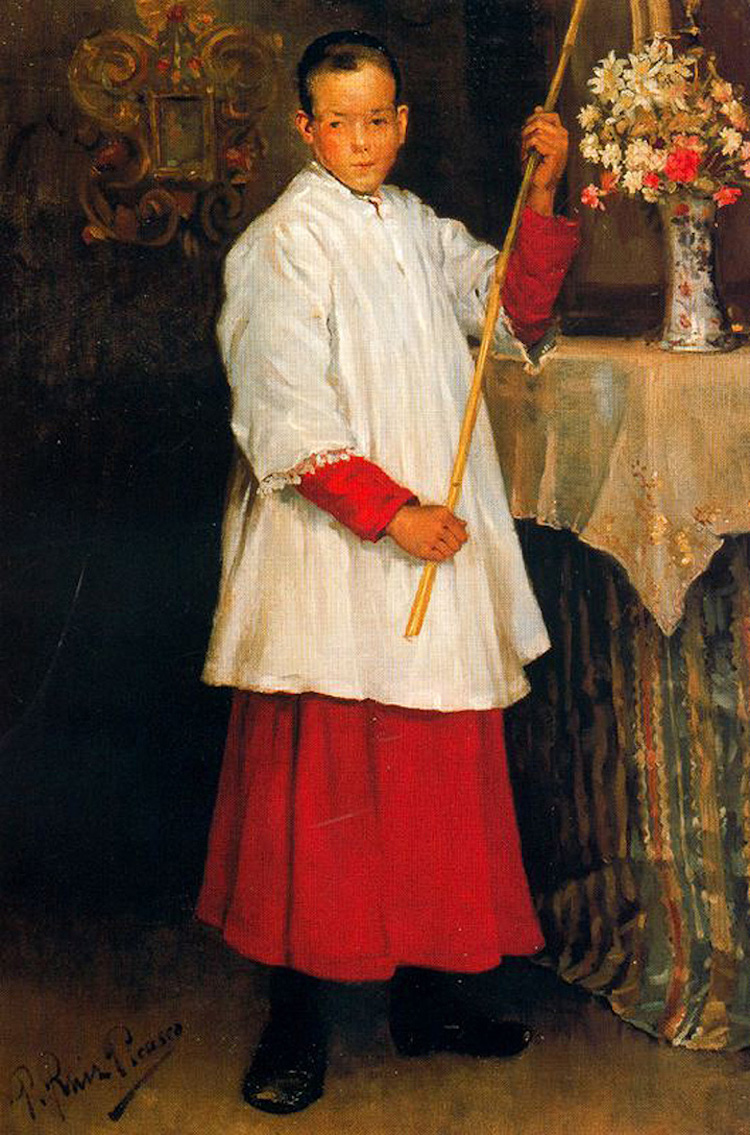 Ignorant people often make remarks about avant-garde artists saying that they cannot paint and that is why they depict blocks and squares. Picasso can serve as an example to prove falseness and primitiveness of this statement. From a very young age he was able to portray a life model on paper with the highest resemblance. The talent lucky to be born into creative environment (the father of the brightest personality in the 20th century painting was a drawing teacher and decorator) developed in a flash. The boy had hardly learned to speak before he started drawing.
The life around continues to be the theme of PicassoвЂ™s paintings: passers-by, fishermen, bathers, numerous neighbours, friends, his father looking like Don Quixote, mother and sister. His sister Lola appears in the genre picture First Communion (1896), his motherвЂ™s image is executed brilliantly in a portrait painted the same year. One of the artistвЂ™s first self-portraits was also created at that time.

In 1907, Picasso joined an art gallery that had recently been opened in Paris by Daniel-Henry Kahnweiler. Kahnweiler was a German art historian and art collector who became one of the premier French art dealers of the 20th century. He was among the first champions of Pablo Picasso, Georges Braque and the Cubism that they jointly developed. Kahnweiler promoted burgeoning artists such as André Derain, Kees van Dongen, Fernand Léger, Juan Gris, Maurice de Vlaminck and several others who had come from all over the globe to live and work in Montparnasse at the time. [34]
In 1897, his realism began to show a Symbolist influence, for example, in a series of landscape paintings rendered in non-naturalistic violet and green tones. What some call his Modernist period (1899–1900) followed. His exposure to the work of Rossetti, Steinlen, Toulouse-Lautrec and Edvard Munch, combined with his admiration for favourite old masters such as El Greco, led Picasso to a personal version of modernism in his works of this period. [24]

Then, the Blue Period started.
The Divan represents a regular scene from night-time venues, taverns and brothels in late-19th century Barcelona around the barri xinès (red light district) which Picasso knew well.