After the birth of their son, Sidney, in 1965, Alfred became prone to bouts of depression brought on by media coverage of the successes of his former contemporaries in the art world. Patti put in for a transfer with her employer, PanAm, and off the young family went to New York City to reclaim the career Alfred left behind, pregnant English Bulldog in tow. Taking up residence in the Hotel Van Rensselaer on Fifth Avenue while Alfred’s artist friends looked for a loft for the family, the couple grew weary of the people and the pace of the city rather quickly. While watching TV In the days before Patti was set to start her new job, their old home was brought into their rented living quarters via a National Geographic program about Don Sheldon, a famous Alaskan bush pilot and husband of Patti’s former college roommate.
According to Patti Skondovitch, who enters this tale shortly in historical order, but who provided us an intimate account of her husband’s life, the goal of this trek was “to start the movement of people to their homeland.” Being confronted with the worst of humanity was something that never left Alfred, he was haunted by it for years to come and began a rather secretive series of paintings in what one assumes was an effort to cope with the persistence of the terrifying images in his mind. He painted 72 works over his lifetime based on the time he spent at the camp, all of them unseen until a few years ago. 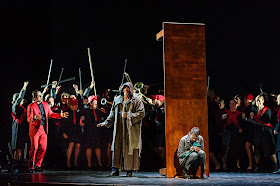 Verdi wrote I Lombardi for La Scala in 1843, a follow up to Nabucco and with the same librettist, Temistocle Solera. As with Alzira (written two years later, and recently revived at the Buxton Festival, see my review), you sense Verdi experimenting. I Lombardi takes the feud between two brothers and spreads it across Italy and the Middle East during the First Crusade, mixing in religion and redemption.
The chorus has an important role to play in the opera, and the Czech Philharmonic Choir Brno impressed both with their warm flexible tone and their commitment to the drama, and this was particularly true in the important choral finale which brought the opera to a thoughtful close.