Quote: “They travelled to Italy together, and on one occasion visited the Naples aquarium. Kokoschka watched an insect sting and paralyse a fish, before devouring it, and at once associated the scene with the woman by his side.” -Edward Lucie-Smith, Lives of the Great 20th Century Artists.
Quote: “In a state of feverish anticipation, like Orpheus calling Eurydice back from the Underworld, I freed the effigy of Alma Mahler from its packing. As I lifted it into the light of day, the image of her I had preserved in my memory stirred into life.” -Oscar Kokoschka

Kokoschka took a strong hand in the doll’s design, sending sketches, measurements, and explicit instructions. Much of the correspondence still survives. E.g.:
The resulting doll is, to say the least, creepy: an enormous, furry creature that looks like some kind of poorly-rendered idol, it bears as little resemblance to the artist’s sketches as to a real woman. Not shockingly, Kokoschka wasn’t into it. As he wrote to Moos,

“The dustcart came in the grey light of dawn, and carried away the dream of Eurydice’s return,” Kokoschka remembered. “The doll was an image of a spent love that no Pygmalion could bring to life.”
So fixated was Kokoschka on the impending delivery of “my beloved, for whom I am pining away,” that not even the charms of pretty Reserl, “whom no man had ever seen naked,” could distract him. Reserl herself was very much in love with her master, whom she referred to as »captain«, and to whom she showed every conceivable devotion. She even carved his initials into her own breast with a knife. Kokoschka remembered that Reserl one day crept into his bed, whispering into his ear: “I am at your service body and soul – dispose of me, Sir.” 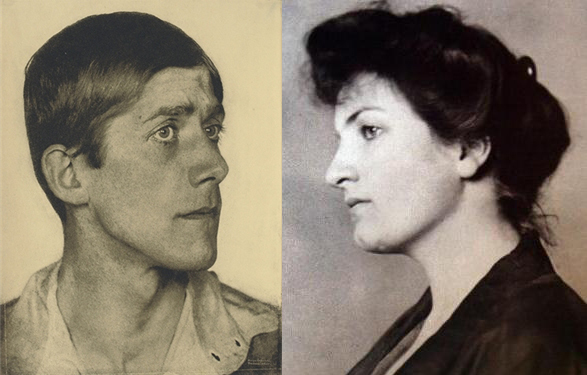 Enter Oskar. It has been said that when Kokoschka wasn’t making love to her, he was painting her. Kokoschka painted and drew Alma compulsively and is the subject of his best known painting, Bride of the Wind. It is considered his crowning achievement and a tribute to his love for her.
In 1912 the great Austrian expressionist painter Oskar Kokoschka started a passionate, tempestuous affair with Alma Mahler. Alma was coming off a bad stretch. Her first husband, Gustov Mahler, 19 years her senior and Director of the Vienna Opera, had died in 1911.Three years earlier, their daughter, Maria had died of scarlett fever. In the wake of Maria’s death, Alma had begun an affair with the Bauhaus architect, Walter Gropius. But with Gustov’s death, Alma quit Gropius.