The new pope, Leo X, then commissioned Michelangelo to rebuild the façade of the church of San Lorenzo in Florence. The scheme was eventually abandoned, but it marks the beginning of Michelangelo’s activity as an architect. Michelangelo also designed monuments to Giuliano and Lorenzo de’ Medici in the Medici Chapel in San Lorenzo.
In 1505, Pope Julius II summoned Michelangelo back to Rome and commissioned him to design Julius’ own tomb. Due to quarrels between Julius and Michelangelo, and the many other demands on the artist’s time, the project was never completed, although Michelangelo did produce a sculpture of Moses for the tomb.

In 1513 Pope Julius II died. The next pope was Pope Leo X, a member of the Medici family. He gave Michelangelo several jobs in Florence, including designing the Medici Chapel to hold the tombs of his family members. Although not all the tombs were built, Michelangelo finished seven large statues including a “Madonna and Child”. His pupils later completed the chapel. [19]
Once again Michelangelo made a statue that became world-famous. The statue shows a young man, naked in the way that statues of ancient gods were made, just pausing for a moment and looking with fierce eyes at the huge soldier Goliath that he is about to kill. The statue is 5.17 meter (17 ft) tall. It was placed in the piazza (public square) outside the Palazzo Vecchio where the town council met. After many years, the statue was put into an art gallery, the Accademia. A copy now stands in the piazza. People still go great distances to see the statue that he made. 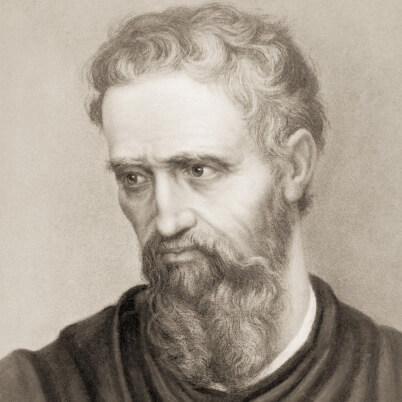 Michelangelo’s art has far reaching historic influence. His world is genetically a two-fold system continually expanding. Measuring his internal development from the Pieta through David to The Last Judgement, we view the path of an experience in which each stage provides the foundation for the next, from sculpture to painting, painting to architecture, architecture to the art of poetry. How can we not be moved by this will, anxious to express the new by using traditional means? At the same time we are aware of the power of his influence. First mannerism, then Johannes Vermeer, Rembrandt, Eugene Delacroix, Rodin, Pollock and De Kooning found in him a model on which they could base their own creations. But the “divine” Michelangelo is more than that. In western world, he was the first – Picasso the last – to regard himself as an absolute and mythic cultural experience. He managed to combine his high level of technical competence and his rich artistic imagination to produce the perfect High Renaissance blend of aesthetic harmony and anatomical accuracy in his work.
At age of 6, Michelangelo was sent to a Florence grammar school but he showed no interest in schooling. He would rather watch the painters at nearby churches, and draw what he saw there. His father realized he had no interest in family’s financial business and agreed to send him to the painter Ghirlandaio to be trained as an apprentice. He was 13 years old at time. In this fashionable Florentine painter’s workshop, Michelangelo learned the technique of Fresco and draftsmanship.

Michelangelo also designed the iconic dome of St. Peter’s Basilica in Rome (although its completion came after his death). Among his other masterpieces are Moses (sculpture, completed 1515); The Last Judgment (painting, completed 1534); and Day, Night, Dawn and Dusk (sculptures, all completed by 1533).
Did you know? Michelangelo received the commission to paint the Sistine Chapel ceiling as a consolation prize of sorts when Pope Julius II temporarily scaled back plans for a massive sculpted memorial to himself that Michelangelo was to complete.

In his lifetime, Michelangelo was often called Il Divino (“the divine one”). [7] His contemporaries often admired his terribilità—his ability to instil a sense of awe. Attempts by subsequent artists to imitate [8] Michelangelo’s impassioned, highly personal style resulted in Mannerism, the next major movement in Western art after the High Renaissance.
Lorenzo de’ Medici’s death on 8 April 1492 brought a reversal of Michelangelo’s circumstances. [25] Michelangelo left the security of the Medici court and returned to his father’s house. In the following months he carved a polychrome wooden Crucifix (1493), as a gift to the prior of the Florentine church of Santo Spirito, which had allowed him to do some anatomical studies of the corpses from the church’s hospital. [26] This was the first of several instances during his career that Michelangelo studied anatomy by dissecting cadavers. [27] [28]