The Bosch-like character of the picture is quite evident from the detail. Its monsters and its magnificent fiery colour palette are familiar from the older master’s representations of Hell, particularly of that on the right-hand panel of Bosch’s Haywain Triptych (1500, Prado Museum, Madrid). But Bruegel has endowed the scene with greater vigour, which while lacking in Bosch’s lyrical charm, produces a level of reality which fits the different character of the picture to perfection. The more three-dimensional forms of the buildings and other objects such as the big bowl with the soldiers, the bell and the flag, the soldiers themselves and the monsters, make them appear more absurb and more foolish than any of Bosch’s, and more appropriate to the protangonist of the painting, which is, afterall, not Satan but Mad Meg.
For the meaning of other pictures, see: Famous Paintings Analyzed.

This painting was mentioned by Carel van Mander in 1604 in his ‘Schilderboeck’. He described the principal character of the painting as ‘a Mad Meg pillaging at the mouth of Hell / seemingly perplexed / and cruelly and strangely attired’, an evil and fearsome woman or witch. Van Mander remained vague about the actual significance of the painting. Perhaps it had already been forgotten by his time. We can be certain, however, that Bruegel gave the work a hidden allegorical or religious meaning, albeit one that remains a mystery. A great many experts have devoted their energies to solving the problem, but none has ever succeeded entirely in explaining the painting. Most of them focus on the possible symbolism of the large woman in the foreground, with her suit of armor, sword, cutlery and money-box. She has been variously interpreted as a symbol of heresy or violence, the personification of hum,an evil and an allegory of instability.
c. 1562
Oil on wood, 117,4 x 162 cm
Museum Mayer van den Bergh, Antwerp 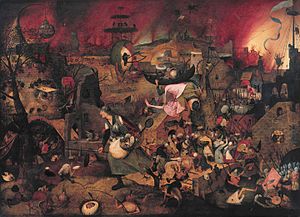 Bruegel is thus making fun of noisy, aggressive women. At the same time he castigates the sin of covetousness: although already burdened down with possessions, Griet and her grotesque companions are prepared to storm the mouth of Hell itself in their search for more. [7]
Dulle Griet appears as a character in Caryl Churchill’s play Top Girls (1982), where she recounts her invasion of Hell: “I’d had enough, I was mad, I hate the bastards. I come out my front door that morning and shout till my neighbors come out and I said, ‘Come on, we’re going where the evil come from and pay the bastards out.'” (Churchill, 28).

Belgium is certainly the place to be in 2019.
The MAS art gallery and museum in Antwerp

Bruegel biographer Leen Huet compares the artist to the director of a horror movie appealing to all the senses. It’s been suggested the painting depicts a time-honoured theme: the battle of the sexes. Note it’s women who are wearing the trousers!
The Mayer van den Bergh Museum in Antwerp is in celebratory mood. One of its star attractions, Pieter Bruegel the Elder’s ‘Dulle Griet’ or ‘Mad Meg’ has just returned to the museum after a two-year restoration operation and an outing via the Bruegel exhibition in Vienna.