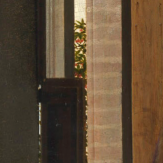 We don’t know exactly who the couple is in the Arnolfini portrait–they’re commonly thought to be Giovanni de Nicolao Arnolfini and his wife Costanza Trenta–but we do know that they were mostly likely part of the Italian merchant class in Flanders and that they were very, very rich. Like, Kardashian rich. And, frankly, if we want to continue the reality TV comparison, this painting is a carefully curated portrayal to signify wealth–much like the opulence we see depicted in Keeping Up with the Kardashians.
The mysteries of the Arnolfini portrait, along with Van Eyck’s masterful technique, continue to enthrall viewers well into its seventh century of existence!

It is now believed that the subject is either Giovanni di Arrigo or his cousin, Giovanni di Nicolao Arnolfini, and a wife of either one of them. This is either an undocumented first wife of Giovanni di Arrigo or a second wife of Giovanni di Nicolao, or, according to a recent proposal, Giovanni di Nicolao’s first wife Costanza Trenta, who had died perhaps in childbirth by February 1433. [14] In the latter case, this would make the painting partly an unusual memorial portrait, showing one living and one dead person. Details such as the snuffed candle above the woman, the scenes after Christ’s death on her side of the background roundel, and the black garb of the man, support this view. [14] Both Giovanni di Arrigo and Giovanni di Nicolao Arnolfini were Italian merchants, originally from Lucca, but resident in Bruges since at least 1419. [10] The man in this painting is the subject of a further portrait by van Eyck in the Gemäldegalerie, Berlin, leading to speculation he was a friend of the artist. [15]
Lorne Campbell in the National Gallery Catalogue sees no need to find a special meaning in the painting: “. there seems little reason to believe that the portrait has any significant narrative content. Only the unnecessary lighted candle and the strange signature provoke speculation.” [22] He suggests that the double portrait was very possibly made to commemorate a marriage, but not a legal record and cites examples of miniatures from manuscripts showing similarly elaborate inscriptions on walls as a normal form of decoration at the time. Another portrait in the National Gallery by van Eyck, Portrait of a Man (Leal Souvenir), has a legalistic form of signature. [10]

The woman in the picture is not pregnant: her bulge merely illustrates the contemporary fashion for voluminous robes. Fertility is however alluded to by the wooden carving on the back of a chair, visible underneath the chandelier. The carving, which overlooks the marriage bed, represents St Margaret, the patron saint of childbirth, signalling a wish for a healthy family. To ensure a successful marriage, a dog in included at the couple’s feet. This is a symbolic reference to faithfulness.
Of course, if the couple are in fact Giovanni di Nicolao Arnolfini and his wife Giovanna Cenami, there is no question of it being a marriage between unequals, as Giovanna was equally well connected. But in 1997 it was established that their marriage did not take place until 1447 – some thirteen years after the date of the painting, and six years after Jan Van Eyck’s death. However, his brother Michele appears to have made such a marriage in Bruges, around the time of the painting. Other art historians think the painting might represent the wedding of Giovanni di Nicolao Arnolfini and his first wife Costanza Trenta. 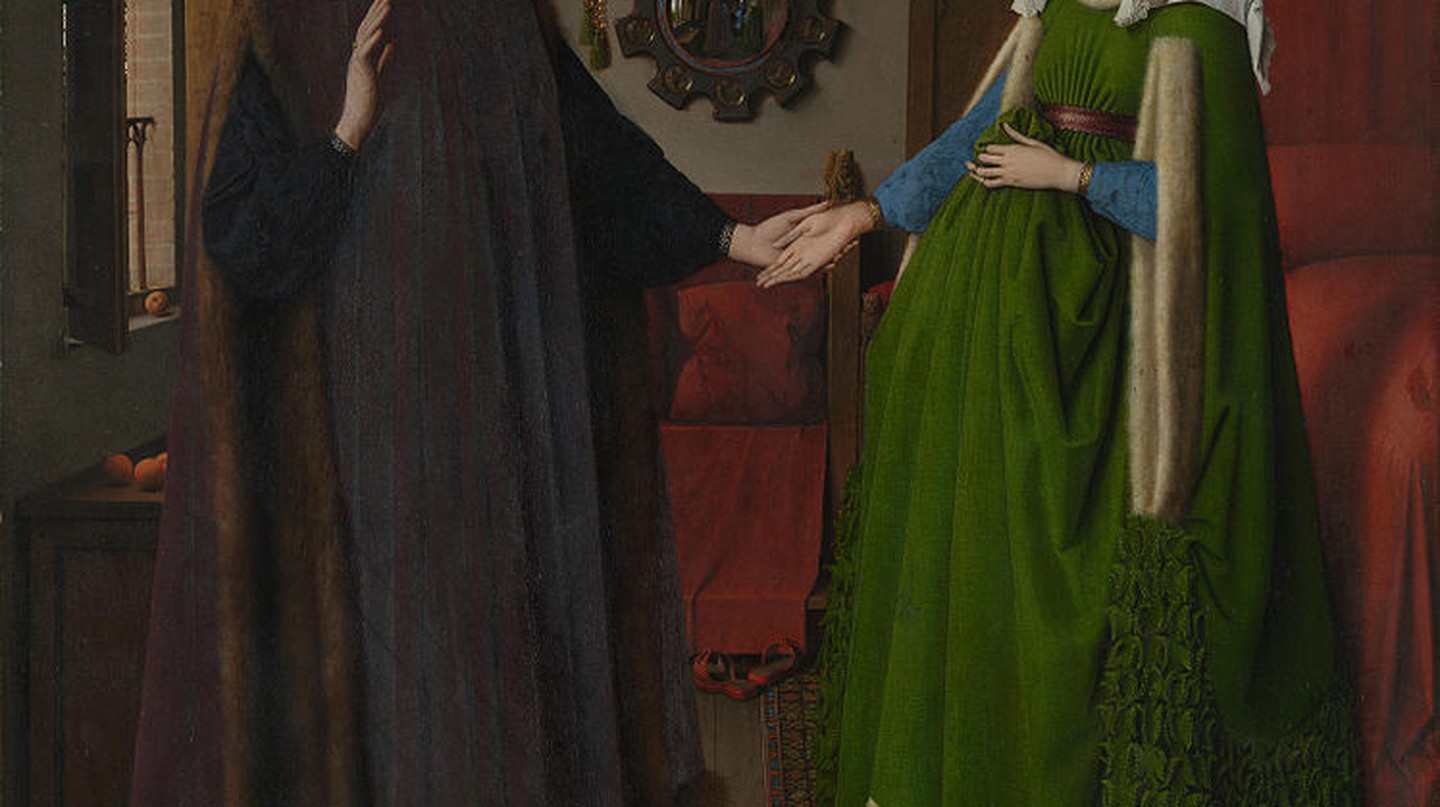 This brings us to the question: who were this couple? The male subject to the viewer’s left of the scene is most recently thought to be a Bruges merchant named Giovanni di Nicolao Arnolfini, and the woman beside him his wife. However, there are several problems associated with the second half of this identification. The artist has clearly written on the painting, in ornate Latin, “Jan van Eyck was here 1434.” However, Giovanni’s wife had died in 1433, which presents the possible hypothesis: van Eyck had begun the work in 1433 while his patron’s wife was alive but she had died by the time he finished it, or it was simply a posthumous portrait. This theory is not unreasonable, and is supported by much of the visual content of the scene: the male figure’s loose grasp on the woman’s slipping hand, and the odd candles in the ornate chandelier – that on the man’s side is still whole and lit, while the opposite candle holder is empty aside from a few drips of wax, signifying that the man’s life light is still burning while hers has burnt out.
Returning to the Arnolfini Portrait, there is also a second possibility, that this is a depiction of a second marriage, for which the records have been lost. Certainly the woman’s face appears particularly young, almost doll-like – although this youth is no indication that she was a second wife, as girls could be married before they were even teenagers at this time. Her appearance is very fashionable, with a high, plucked brow and specifically styled hair. Scholarship does not seem to think that she is pregnant although she does immediately appear that way, but rather that she was lifting a great deal of heavy, pleated cloth in order to show off her expensive blue underskirt. Of course, this could be a mistake and the cloth could have been simply intended to draw attention to her waist; there is after all, no mistaking the obvious bed behind her, symbolically decked out entirely in red – an inarguable signifier of love, and passion. 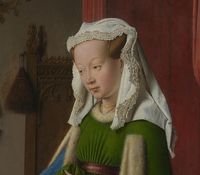 The painting depicts a rich couple, both from the largest banking families in Lucca, convening in a parlor of French fashion. The couple is warmly and finely dressed, their garments are cut with fur, even though the fruit outside the windows on the tress suggest that it is summer time.
The portrait of Giovanni is one of confidence and with his left hand almost in the position of a saint’s. The bride or woman has a calmness to her and the overall scene suggests a wedding or a contract.