Jan and Hubert van Eyck’s famous Adoration of the Mystic Lamb, better known as the Ghent Altarpiece of 1432, ranks among the most significant works of art in Europe. Housed at Saint Bavo Cathedral in Ghent, Belgium, the large and complex altarpiece suffered a varied history over the centuries. Dismantled, stolen, and damaged many times over, it was reassembled, cleaned, and restored after World War II. Despite this harrowing past, today scholars and art lovers around the world are only a click away from freely exploring over 100 billion pixels of the altarpiece online, thanks to a series of grants provided by the Getty Foundation as part of the Panel Paintings Initiative.
During the technical study, experts produced documentation of unprecedented detail and quality that resulted in the innovative web application Closer to Van Eyck: The Ghent Altarpiece Restored, which was supported largely by the Getty Foundation and is hosted by KIK/IRPA. The site allows users to zoom into individual sections of the altarpiece and take a virtual peek under the paint surface by means of infrared reflectography (IRR) and x-radiography, examining the altarpiece in ways never before possible.

Later the ‘John the Baptist’ panel was returned anonymously, but ‘The Just Judges’ is still lost without trace. Today you can find the Ghent Altarpiece where it belongs: in St Bavo’s Cathedral . Admittedly there is still a reproduction in the place of the stolen panel, ‘The Just Judges’. Whether or not the missing panel is ever found, this theft has given rise to all sorts of exciting stories and mysterious conspiracy theories.
Noah Charney 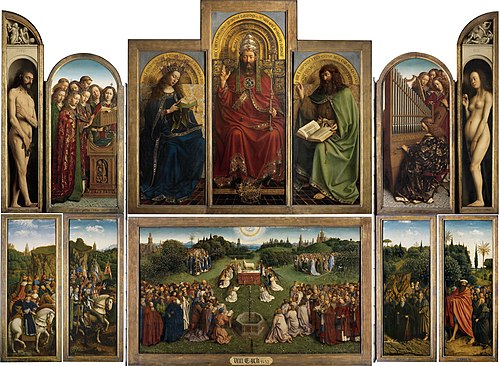 These panels are flanked by two pairs of images on the folding wings. The two panel closest to the Deësis show singers in heaven; the outermost pair show Adam and Eve, naked save for strategically placed fig leaves. [16] The lower register has a panoramic landscape stretching continuously across five panels. While the individual panels of the upper tier clearly contain separate—albeit paired—pictorial spaces, the lower tier is presented as a unified Mise en scène. [17] Of the 12 panels, eight have paintings on their reverse visible when the altarpiece is closed.
The altarpiece was commissioned by the merchant Jodocus Vijd, then Mayor of Ghent, and his wife Lysbette, as part of a larger development project for the Saint Bavo Cathedral chapel. The installation of the altarpiece was officially celebrated on 6 May 1432; it was much later moved for security reasons to the principal cathedral chapel, where it remains. 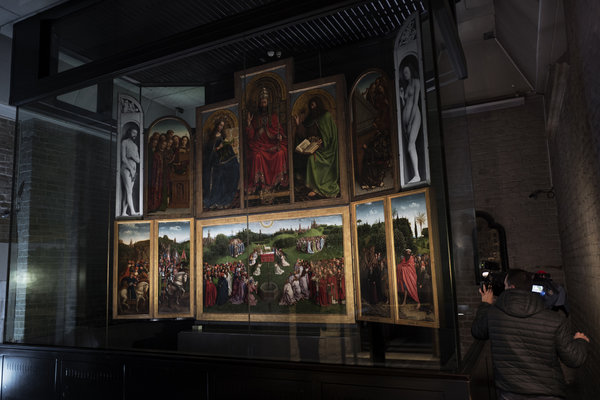 But luckily, restorers discovered that there was also a very thick layer of varnish between the original painting and the newer version, which made it relatively easy for them to remove that layer to get back to van Eyck’s work, Ms. Dubois said. The original head of the lamb, for example, was “in very good condition,” she said. “We only had to do a tiny restoration of tiny paint losses.”
Inside, displayed in a huge glass vitrine, was the nearly 600-year-old masterpiece by the brothers Hubert and Jan van Eyck, its details defined and its colors vibrant and joyful, as they must have been when it was painted. The massive work, created from 20 paintings on the front and back of 12 panels, is an astounding work of art. The lamb’s face, at the center of the largest panel on the front, is no bigger than a walnut.