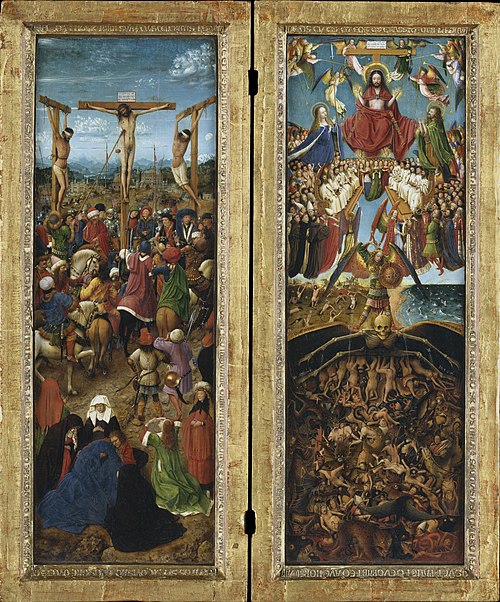 The 1430s dating is supported by the style of the underdrawing, which is consistent with known signed works by van Eyck from that time. In addition, the figures are dressed in clothes fashionable in the 1420s with the exception of one of the possible donors, tentatively identified as Margaret of Bavaria, who is depicted as the sybil standing in the right foreground of the crucifixion panel and wears clothes in style in the early 1430s. [2]
Headed by Saint Peter, the Apostles are dressed in white robes and sit on two facing benches set below Christ and to the right and left of the choir of virgins. Two angels attend to the groups gathered at each side of the benches. [39] A further two angels are positioned immediately above Christ. They hold his cross and are dressed in white amice and albs, with the right hand angel wearing an outer blue dalmatic vestment. They are flanked on either side by angels playing long wind instruments, probably trumpets. [28] The two angels on either side of Christ bear the symbols of the crucifixion already represented on the left hand panel. The angel on the left holds a lance and crown of thorns, the angel on the right a sponge and nails. [34] [36] 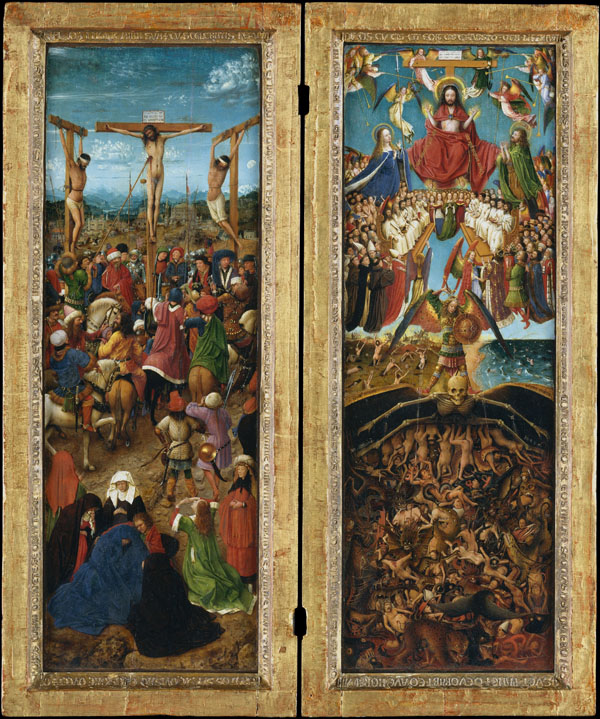 Alex also pointed out the two armed men on the lower right, one of whom carries a small Mongol riding shield. What are Mongols doing in the Holy Land? I would never have known they were Mongols, but it doesn’t surprise me; van Eyck seems virtually omniscient. His breadth reminds me of Rackstraw Downes’s terrific early essay about completeness. Downes argued that Modernism, in its drive for purity, lost the inclusiveness, the empirical breadth, of earlier art. Not just the willingness to render things, but the sense of the range of possible experience. To me, this is the perfect example of Downes’s point, a painting that registers everything—a glinting horseshoe, a visiting Mongol, the death of God.
At the Met we spent almost all our time poring over the Crucifixion scene, pretty much ignoring its sibling panel, the Last Judgment on the right. Some might argue that second panel is even more complete, more encompassing, since it includes heaven, earth, and a very crowded hell. But it seems like a diagram to me, three separate illustrations sutured together. The Crucifixion is so powerfully a single scene. I love the way each of its different bands or zones links and intensifies the others. 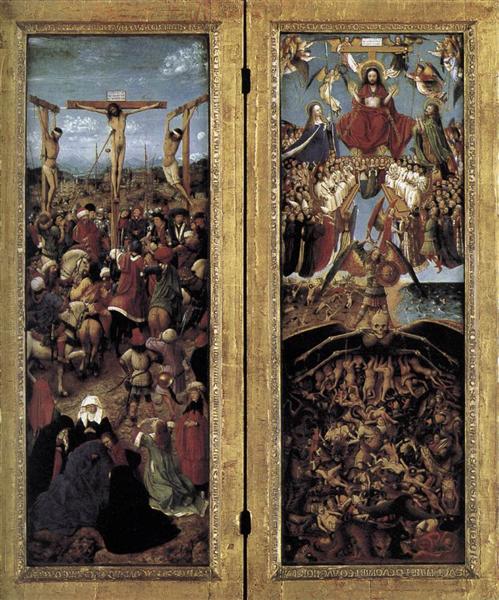 Along with Robert Campin and later Rogier van der Weyden, Van Eyck revolutionised the approach towards naturalism and realism in Northern European painting during the early to mid 15th century. He was the first to manipulate oils to give the close detailing that infused his figures with the high degree of realism and complexity of emotion seen in this diptych. He coupled this with a mastery of glaze to create luminous surfaces with a deep perspective—most noticeable in the upper portion of the Crucifixion panel—which had not been achieved before.
The left-hand wing depicts the Crucifixion. It shows Christ’s followers grieving in the foreground, soldiers and spectators milling about in the mid-ground and a portrayal of three crucified bodies in the upper-ground. The scene is framed against an azure sky with a view of Jerusalem in the distance. The right-hand wing portrays scenes associated with the Last Judgement: a hellscape at its base, the resurrected awaiting judgement in the centre-ground, and a representation of Christ in Majesty flanked by a Great Deësis of saints, apostles, clergy, virgins and nobility in the upper section. Portions of the work contain Greek, Latin and Hebrew inscriptions. The original gilt frames contain Biblical passages in Latin drawn from the books of Isaiah, Deuteronomy and Revelation. According to a date written in Russian on their reverse, the panels were transferred to canvas supports in 1867. 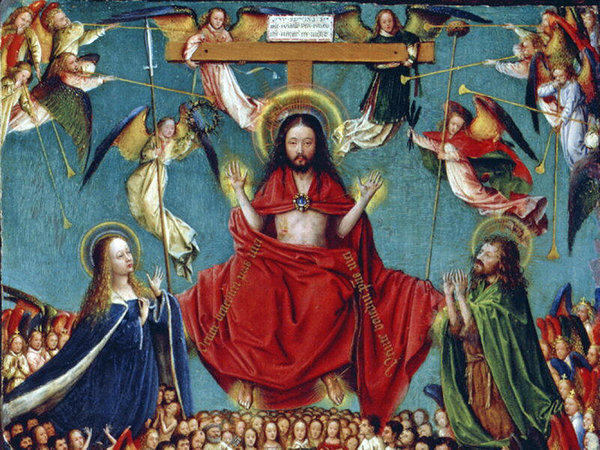 “The Crucifixion,” by contrast, has more clearly articulated three-dimensional space, achieved via a proto-Renaissance aerial perspective. Jesus is splayed on a tall cross above a circle of turbaned, Flemish-looking figures on horseback, one of whom wears a fur-trimmed hat and pierces Jesus’s right side with a spear. He is a contemporary Longinus, the one who says, “Truly, this man is the son of God.” Mary has collapsed to the rocky ground, her face nearly invisible beneath her blue mantle. In the background, above the mountains, the moon has risen; van Eyck has been credited with the first accurate paintings of the lunar surface.
This exhibition has been organized by Maryan Ainsworth, a curator in the Met’s department of European paintings, and is the latest in a sequence of rigorous, small-scale shows examining late-medieval and Renaissance art. Previous examples include a tight showcase of devotional works by Piero della Francesca, as well as a brilliant exhibition last year, also organized by Ms. Ainsworth, that placed Lucas Cranach’s painting of the black St. Maurice within a larger story of representations of Africans in European art.

The left-hand panel depicts the Crucifixion with a view of Jerusalem in the distance. It shows Christ’s followers grieving in the foreground, soldiers, and spectators surrounding the cross in the mid-ground, and three crucified bodies in the top third of the painting. Crucifixion was a painful method of capital punishment in which the victim is tied or nailed to a large wooden beam and left to hang for several days until eventual death. The crucifixion of Jesus is a central narrative in Christianity, and the cross is the primary religious symbol for many Christian churches.
About 20 surviving paintings are attributed to him, as well as the Ghent Altarpiece and the illuminated miniatures of the Turin-Milan Hours. Van Eyck painted both secular and religious subject matter, including altarpieces, single panel religious figures, and commissioned portraits.