Vauxcelles, on 25 March 1909, used the terms “bizarreries cubiques” (cubic oddities) after seeing a painting by Braque at the Salon des Indépendants. [9]
Braque‘s paintings of 1908–1912 reflected his new interest in geometry and simultaneous perspective. He conducted an intense study of the effects of light and perspective and the technical means that painters use to represent these effects, seeming to question the most standard of artistic conventions. In his village scenes, for example, Braque frequently reduced an architectural structure to a geometric form approximating a cube, yet rendered its shading so that it looked both flat and three-dimensional by fragmenting the image. He showed this in the painting Houses at l’Estaque.

This definitive retrospective of the career of Georges Braque (1882–1963) presents more than 75 significant works of art. The selections range from the artist’s early, bold Fauvist paintings, to the radical Cubist compositions that shaped the course of Modern art, to the lyrical still lifes and landscape abstractions of his later years.
In-Gallery Extra: Take the Audio Tour
Enhance your exhibition experience and discover additional aspects about the artwork. You may purchase the optional audio tour at the admissions desks.

1939 Moves to Varengeville for the duration of the war. First forays into sculpture, series of austere, symbolic vanitas.
Georges Braque (1882−1963) is one of the 20th century’s major artists. A painter, sculptor, and engraver he played the lead part in two essential chapters in the history of modern art: the creation, with Pablo Picasso and Juan Gris, of Cubism, and the invention of collage thanks to his experiments with papiers collés (“pasted papers”). He later focused his work on the methodological exploration of still life and landscape painting. Braque became the modern French painter par excellence, heir to classical tradition and representative of the avant-garde, precursor of post-war abstraction. This major retrospective of his work, organized to celebrate the 50th anniversary of his death, covers all periods of his career, from his fauve years—he exhibited with the young fauve artists at the 1907 Salon des Indépendants—until his last series dedicated to the artista studios and birds, with specific emphasis on the most outsanding periods of his work, such as Cubism, his Canephore paintings of the 1920s or his last landscapes, so greatly admired by Nicolas de Staël 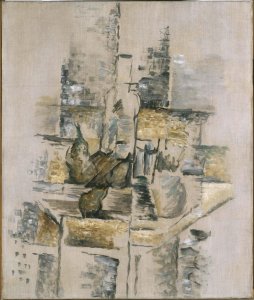