Michelangelo spent the majority of his life studying the human form and was obsessed with the body being a physical representation of the soul. Michelangelo produced three pieces that are considered some of the greatest works of art in history; Pieta, the ceiling of the Sistine Chapel and the dome of St Peter’s Basilica.
As a young artist working in Florence Michelangelo was taught the art of fresco painting by his superiors. However records show that it was not long before he began to sculpt. Between the ages of thirteen and fourteen Lorenzo the Great saw Michelangelo sculpting a faun’s head and it was this that secured his successful future.

One of Michelangelo’s most famous figures in the Sistine Chapel is his Libyan Sibyl. His sketch of her is equally well known and close study of the drawing reveals how occupied the artist was with her every aspect.
He believed that drawing — and drawing repeatedly — was the way forward in one’s art practice. There’s no time like the present, so grab a sketchbook and get to filling it.

Working under the close supervision of an instructor, students will select a work of art from the Met’s collection and embark on a careful study of the piece in order to figure out how to recreate it.
Classes meet once a week from 11:30 a.m. to 3:30 p.m. and, based on the course description, by the end of the session students will be well trained in both art appreciation and creation. Topics covered will include color matching and mixing, laying out a painter’s palette, glazing techniques, surface preparation, and the historic use of materials, mediums, and pigments. 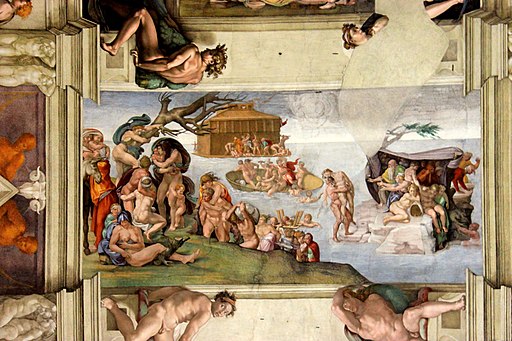 In order to frame the central Old Testament scenes, Michelangelo painted a fictive architectural molding and supporting statues down the length of the chapel. These were painted in grisaille (greyish/monochromatic coloring), which gave them the appearance of concrete fixtures.
The Sistine Chapel is one of the most famous painted interior spaces in the world, and virtually all of this fame comes from the breathtaking painting of its ceiling from about 1508-1512. The chapel was built in 1479 under the direction of Pope Sixtus IV, who gave it his name (“Sistine” derives from “Sixtus”). The location of the building is very close to St. Peter’s Basilica and the Belvedere Courtyard in the Vatican. One of the functions of the space was to serve as the gathering place for cardinals of the Catholic Church to gather in order to elect a new pope. Even today, it is used for this purpose, including in the recent election of Pope Francis in March 2013.