Giacometti, who was from Switzerland, is often depicted as a mercurial soul – socially and emotionally awkward, a man who endears and enrages in equal measure. Back in 1948, the philosopher Jean-Paul Sartre wrote an essay entitled The Search for the Absolute, which revealed that the process of making art was so psychologically painful for Giacometti that he would take years to produce anything that didn’t (for him) fail. He would often destroy more than he sent out of the studio.
The Conversation UK receives funding from these organisations

”A rose without thorns,” is what Andre Gide called Switzerland, much to the irritation of the Swiss, who like to consider themselves a passably thorny lot. Take for example Alberto Giacometti, who was born in 1901 in the Bregaglia Valley, just north of the Italian border. If Gide in a botanizing mood had ever met the great sculptor, I am sure he would have found him wondrously thorny both as a man and as an artist. Giacometti seems to have been all thorn, a prickly maker of prickly statues, with a wiry build and spatulate fingers and hair standing on end. His first inportant works, executed in Paris in the late 1920’s, when he fell under the influence of Surrealists, are perhaps less thorn than petal; the ”Spoon Woman” of 1926 is almost as petal-like as spoonlike in shape. But as time wore on, Giacometti’s sculptures shed more of their bulk. At length they turned into the elongated figures, rather shorter than life-size (and usually cast in bronze), that won him international acclaim in the ’50’s.
Text:
It is not for nothing that James Lord has lived in Paris since 1946; he has mastered more than the cafe wit. He is a keen psychologist, given to the sort of convoluted probing one finds so often in old French diaries and letters. Listen, for example, to his characterization of the fraternal relations of Alberto and Diego. ”[Diego] seems from an early age to have felt a strange sort of dissociation from himself, as though cut off somehow from the natural expectation of life’s unlimited possibilities. Such a feeling was in glaring contrast to his brother’s self-confidence and studious sensitivity. Alberto held a whole world of beauty and delight at his fingertips. Diego, on the other hand, felt unhappy with his endowments. Some intolerable discontent was at work, and it centered upon the most immediate, physical organs of his contact with the world: his hands. His fingers, their physical appearance, displeased and upset him. His childish mind was beset by a painful malaise, as if the ability of his hands to do what they are meant to do put him at unbearable odds with himself.” And when Mr. Lord says that Alberto could not have ”imagined that the depression with which he embraced his liberation was in direct proportion to the dispassion with which he embraced his liberator” (a prostitute), one almost believes one is hearing the ghost of Stendhal or Benjamin Constant.

The show is handsome, consistent and more than a little timid. It unfolds chronologically up the Guggenheim’s quarter-mile spiral, and his frail anthropoids have generous breathing room in the museum’s bays. It offers a biographically driven account of his artistic development, recounting his embrace and rejection of Surrealism in the 1930s and his later turn to existentialist philosophy. The curators have included a few nice bits of ephemera (copies he drew of Egyptian sculpture, and three sketches of eyeballs done with a blue ballpoint pen), but no real surprises. Nor are expectations overturned in the catalog, which is nearly as thin as one of Giacometti’s gaunt humanoids, with just three essays.
Remember the squalor of Giacometti’s studio as you wend through the retrospective that opens Friday at the Solomon R. Guggenheim Museum. In Frank Lloyd Wright’s circular white temple, the art of this Swiss polymath — above all his emaciated humans in bronze or plaster, but also his earlier Surrealist compositions and his ghostly painted portraits in mucky grays and browns — look even more austere than usual. But getting to that stern, drastic style took arduous, day-by-day work, and the results never satisfied him, though they never stopped him either. “The more you fail the more you succeed,” said Giacometti. He did both every day in his filthy studio, driven with a tenacity you might also call love.

It is instructive to consider his work alongside paintings and sculptures by the likes of Jean Dubuffet, Jean Fautrier and Germaine Richier, who all convey something of the broken, bomb-scarred textures of the city, since they suggest that Giacometti was far from alone in articulating the pervasive new spirit of austerity amid the rubble. Richier’s small bronze figure Man-Bird (1954), with its scythe-shaped skull, has a witchy, nightmarish ferocity.
A fter a conventional introduction, featuring his early 1920 self-portrait in oils, as well as the Sainsbury Centre’s own haunting pencil-on-paper self-portrait from 1935, the show pauses in order to explain Giacometti’s relationship with the connoisseurs Robert and Lisa Sainsbury, who amassed an important collection of his art, before founding the Centre during the Seventies. 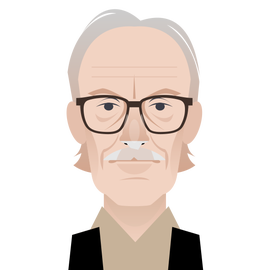 He was ridden with phobias of death, darkness, and open spaces. His friend Simone de Beauvoir—the subject here of three heads, each sporting a turban—recalled “a long period,” in 1941, “when he could not walk down a street without putting out a hand and touching the solid bulk of a wall in order to arm himself against the gulf that yawned all around him.” Infertile from an adolescent bout of mumps, he was often impotent except with prostitutes, whom, for their detachment, he termed “goddesses.” He remained emotionally attached to his mother, visiting her regularly in Switzerland until her death, in 1964, two years before his fatal heart attack. He met Annette Arm in Geneva in 1943 and seems to have married her six years later because she insisted on it and showed herself willing to subordinate herself to him, come what may. They lived to the end in a plaster-spattered Montparnasse studio that another friend, Jean Genet, described as “a milky swamp, a seething dump, a genuine ditch.” Giacometti was a voluble and, by all accounts, enchanting conversationalist, humbly courteous, whose most frequent topic happened to be the hopelessness of his enterprise. He took long walks with a friend who knew the feeling—Samuel Beckett—reportedly in mutual silence.
There might not seem to be much left to say about Alberto Giacometti, the subject of a majestic, exhausting retrospective—pace yourself, when you go—at the Guggenheim. Critics, scholars, philosophers, poets, journalists, and chatty amateurs have all had a go at the Swiss master of the skinny sublime. I wrote about him in these pages seventeen years ago, on the occasion of a retrospective at the Museum of Modern Art. A standard story of Giacometti, as a Surrealist who became a paragon of existentialism for his ravaged response to the Second World War, was well established by 1966, when he died, at the age of sixty-four. He hasn’t changed. The world has, though, and with it the significance of a man who termed himself a failure and chose to live in bohemian squalor even while, in his later years, he was quite rich and famous. A rather sudden consensus of people who keep score regarding canons has come to rank the legendary eccentric as the world’s greatest modern sculptor after Rodin—despite fair quibbles in favor of Brancusi or the moonlighting feats of the painters Picasso, Matisse, and de Kooning. The taste leaders are wealthy people, with exegetes in their wake. Why Giacometti? What is he to 2018 and 2018 to him?