A devout Catholic, from 1917 onwards, Rouault primarily dedicated himself to creating religious paintings, chiefly on the theme of The Passion. In fact, today he is considered one of the most important religious artists of the 20th century. Rouault himself said, ‘All of my work is religious for those who know how to look at it.’ One of his most famous works is a series of etchings called Miserere et Guerre, which was inspired by the misery of World War I. The etchings were used initially to illustrate two books Miserere (Have mercy) and Guerre (War), to be written by the poet Andre Suares. The books never appeared, but with the help of the art dealer Ambroise Vollard (1866-1939), Rouault completed the commission between 1914 and 1918. He continued to work on the plates until they were finally published in 1927. Rouault improved the technical print process with these engravings, using sandpaper, edged rollers, scrappers and acid to produce depth, variety and richness, rivalling what could be achieved with paint on canvas. Miserere depicts many scenes, including clowns, kings and prostitutes, but the central and reoccurring theme is the figure of Christ. Miserere was born out of the unprecedented violence of World War I and the artist’s intense compassion for the marginalized and underprivileged. The prints are a wonderful achievement in the medium of religious printmaking and are just as powerful today, as they were when printed almost a century ago.
Fauvism was a short-lived but important art movement (c.1905-1910) in the early part of the 20th century. Fauvist painters emphasised the function of colour in painting above representational or realistic values, an idea that had begun with the Impressionists. Gustave Moreau was the Fauvists’ inspirational teacher. As well as Rouault and Matisse, he also taught other modern artists including Albert Marquet (1875-1947), Charles Camoin (1879-1965), and Henri-Charles Manguin (1874-1949), three other important figures in the movement. Moreau encouraged his students to use colour for expression. The movement was also fed by other avant-garde forms of modern art which were in circulation at the time, including works by the French Primitives and African sculpture. Rouault exhibited with the Fauves in their now famous 1905 show at the Salon d’Automne at which the group received their name from the art critic Louis Vauxcelles (1870-1943). Although part of the show, Rouault remained aloof, preferring to develop his own personal, purer style of painting. Thus he avoided the Fauves’ garish palette in favour of sombre but glowing colours. 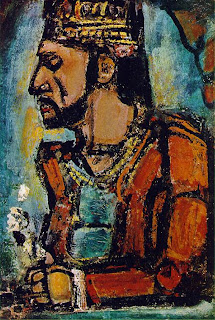 Few artists of this century have ever scaled such spiritual heights or plumbed such depths of human degradation as Georges Henry Rouault (pronounced Ru-OH). The depths were expressed in his prostitutes whose nakedness he painted obsessively. A critic referred to them as, “. gutter Venuses in poses of epileptic toads.” Yet spiritual achievements in watercolors, gouache, oils, aquatints, and lithographs were so vast they constituted an iconography of religious endeavors unmatched by any artist of his time. When one considers the explosive power of his work, smouldering with sonorous color, searing reds, and cobalt blues, it’s surprising that fame came so late in his lifetime. It wasn’t until after WW II when he was in his seventies that the world came to appreciate his talents as a “painter’s painter”.
“Art Now and Then” does not mean art occasionally. It means art NOW as opposed to art THEN. It means art in 2020 as compared to art many years ago. sometimes many, many, MANY years ago. It is an attempt to make that art relevant now, letting artists back then speak to us now in the hope that we may better understand them, and in so doing, better understand ourselves and the art produced today.

Between World Wars I and II, at the instigation of the Paris art dealer Ambroise Vollard, Rouault devoted much time to engravings, illustrating Les Réincarnations du Père Ubu by Vollard, Le Cirque de l’étoile filante by Rouault himself, Les Fleurs du mal by Charles Baudelaire, and Miserere (his masterpiece in the genre), with captions by Rouault. Some of this work was left unfinished for a time and published later. In 1929 he designed the sets and costumes for a production by Serge Diaghilev of Sergey Prokofiev’s ballet The Prodigal Son. In 1937 he also did the cartoons for a series of tapestries.
Rouault’s artistic evolution was accompanied by a religious one, for he had become, about 1895, an ardent Roman Catholic. He became a friend of the Catholic intellectuals Joris-Karl Huysmans and Léon Bloy. Through another friend, a deputy public prosecutor, he began to frequent, as had Daumier, the Paris law courts, where he had a close view of humanity apparently fallen from the grace of God. His favourite subjects became prostitutes, tragic clowns, and pitiless judges.

A French Expressionist and devout Catholic, Rouault was born in the Belleville quarter on the outskirts of Paris. “In the faubourg of toil and suffering, in the darkness, I was born. Keeping vigil over pictorial turpitudes, I toiled miles away from certain dilettantes,” he later wrote.
His father was a cabinetmaker, and Rouault’s first job was as an artisan’s assistant to a restorer of stained glass windows. “My time there was short, but it marked me with a seal that was legendary, epical,” he said. Ever after he would remember the spirit of the anonymous artists who had made the windows but refrained from attaching their names to their work.