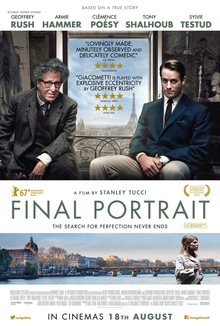 Throughout the 1950s and early 1960s , existentialists declared that Giacometti’s gaunt and elongated sculptures and sparse portraits were the artistic embodiment of their pessimistic, dead-end philosophy— i.e., an expression of humanity’s “social alienation,” “psychological angst,” and the “absurdity” of contemporary life.
Final Portrait does not attempt to provide a detailed overview of Giacometti’s life and work, and the multiplicity of factors under pinning it. But the film perfectly captures his world and his aesthetic dilemmas. Director of photography Danny Cohen gives the movie a grey-brown desaturated look, in keeping with Giacometti’s studio.

The film has the easy-going, thoroughly tasteful and polite generosity of New Yorker profiles, eschewing conflict for character. The only real drama involves Lord having to constantly delay his return to New York because Giacometti keeps prolonging the process. Seen from our perspective today – and seeing the lovely film that has resulted – it feels like a very first-world problem. Lord, essentially, has an inspiring, fascinating and occasionally frustrating time with Giacometti, as do we.
* * * (out of five) The acting performances are so genuine, I would often forget I was watching a movie with actors. I could see myself posing for Giacometti in his studio and enjoying our conversations together. I could feel myself cringe when Giacometti, in a fit of rage, would start to burn his drawings. And I could feel myself painting in the studio as well, or trying to, and feeling my insecurities build up when my paintings don’t quite measure up to my expectations of them.
‘Final Portrait’ begins with the cinematography of Danny Cohen, who was the director of photography. The cinematography sets the mood. The film is in color, but most of the scenes, which take place in the artist’s studio, have only a hint of color. The screen is dominated by warm and cool greys. The mood of the paintings, as well as the mood of the sculptures, is fully captured because Giacometti’s paintings are grey and Giacometti’s sculptures are grey. Many of the frames of this film are wonderful works of art in their own right. The scenes that show Giacometti seated in front of his easel painting are beautifully composed. The artist is often seated at the far left of the screen, his palette in one hand and his paintbrush in the other, while James Lord, dressed in a suit and tie, is seated motionless at the far right of the screen and looking straight ahead, both feet planted firmly on the floor in front of him, holding the pose as well as an untrained model can possibly hold it, and between them is the atmosphere of the studio, with a large grey sculpture of a head its most prominent feature.