There has long been great discussion over the Landscape with the Fall of Icarus painting because it does not fit consistently into the career of Pieter Bruegel the Elder for several different reasons. Firstly, the artist used tempera on canvas in all his other paintings where as this was created in oils as seen far more commonly now. The mythological topic around which this painting was based would also be the only time that Bruegel would have done this.
The Landscape with the Fall of Icarus painting is believed to have been completed around the 1560s and there still remains some question marks over whether Pieter Bruegel the Elder was in fact the original artist but no other painters have ever been linked to it. The classic work can now found on display in the Royal Museums of Fine Arts of Belgium and is held within their permanent collection, being one of the museum’s major attractions. 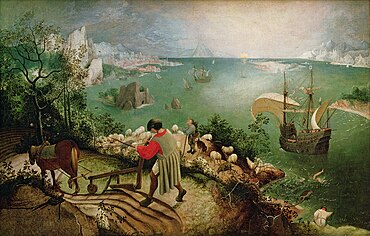 Recently, a study of the underdrawing using infrared reflectography has been published. [11] Reflectography is based on the fact that the infrared light penetrates all colors except black. As a result, the drawing, mostly black, can be made visible. The interpretation of these reflectograms is of course more subjective, but in a global way, the drawing from the Fall of Icarus is not really different from other certified works from Peter Bruegel the Elder. This drawing is generally limited to a layout of the elements. Probably because the thin, weakly covering paint on white ground would hide imperfectly a detailed graphism.

a parable on human aspiration. Daedalus and his son, Icarus, were imprisoned on the island of Crete. Daedalus created wings to fly away. Icarus, ambitiously, flew too near the sun. The wax holding his wings together melted and he plunged into the sea and was drowned.

All his most famous paintings come from the decade before his early death, when he was in his early forties, and at the height of his powers. He dropped the ‘h’ from his name and signed his paintings as Bruegel, and he is sometimes referred to as “Peasant Bruegel,” to distinguish him from the many later painters in his family, including his son Pieter Brueghel the Younger (1564-1638).
“astonished and think to see gods approaching them through the aether.”

“Landscape with the Fall of Icarus,” painted around 1555.
Support the news