In the case study presented above, the mock-up was created for educational purposes. Yet the end result begs the question of reproduction. To explore the appropriateness of this activity for Hesse’s sculptures made from ephemeral materials, one needs to consider the role of repetition in her work. Clearly, this act was at the heart of her creative process, most evident in 1966 with her circle drawings and washer pieces, continuing to her later works including Contingent, 1969. However, actual replication, where elements of a work were reproduced with a mould-making process, were limited to rubber works from 1967–8 (Schema, Sequel, Stratum) and her first fibreglass works with Doug Johns in 1968 (Sans II , Accretion, Repetition 19 III ). These works rely on a mould-making process and seem to be limited to 1967–8 – transitional years when Hesse’s sculptural work shifted to a larger scale and incorporated studio assistants in the process.
Fig.6
Eva Hesse
Detail of Connection 1969
© The Estate of Eva Hesse. Hauser & Wirth Zürich London

It would be wrong to harness Hesse merely as a tool to reinvestigate minimalist work. Equally it would be wrong to project certain biographical details of Hesse’s life, which has been done excessively, onto the sculptures. They have an independence which is above and beyond this.
We can almost drown in the multiple associations these eight hanging sheets induce, almost all of which are anthropomorphic. They appear like dresses, beautiful fabrics waiting for the final tailoring of the designer. The whole reads like some mystical clothes line, with static forms seemingly capable of blowing in the wind. They are flayed skins, the trophies of some ritualistic torture or punishment. They are hanging carcasses of some unknown animal, the display room of a butcher from some unknown abattoir. They are sheets of honeycomb glowing and in the process of decaying or vague resemblances of bodily forms floating just above the ground. The rough human scale, the sense of skin in the surface, the fragility of the materiality’s, the translucency of the parts reading like autumn leaves held up to the sun. It is all of these properties which lead to us making such human associations.

While experiences no doubt had profound impressions on Hesse, the true impact of her artwork has been her formal, artistic invention: for example, her inventive uses of material, her contemporary response to the minimalist movement, and her ability to usher in the postmodern and postminimalist art movements. Arthur Danto connects the two by describing her as “cop[ing] with emotional chaos by reinventing sculpture through aesthetic insubordination, playing with worthless material amid the industrial ruins of a defeated nation that, only two decades earlier, would have murdered her without a second thought.” [28]
In 1961, Hesse’s gouache paintings were exhibited in Brooklyn Museum’s 21st International Watercolor Biennial. Simultaneously, she showed her drawings in the John Heller Gallery exhibition Drawings: Three Young Americans. [24] In August 1962, she and Tom Doyle participated in an Allan Kaprow Happening at the Art Students League of New York in Woodstock, New York. In 1963, Hesse had a one-person show of works on paper at the Allan Stone Gallery on New York’s Upper East Side. [44] Her first solo show of sculpture was presented at the Kunstverein für die Rheinlande und Westfalen, Düsseldorf, in 1965. [9] In November 1968, she exhibited her large-scale sculptures at the Fischbach Gallery in New York. The exhibition was titled Chain Polymers and was her only solo sculpture exhibition during her lifetime in the United States. [45] The exhibition was pivotal in Hesse’s career, securing her reputation at the time. [45] Her large piece Expanded Expansion showed at the Whitney Museum in the 1969 exhibit “Anti-Illusion: Process/Materials”. [46] 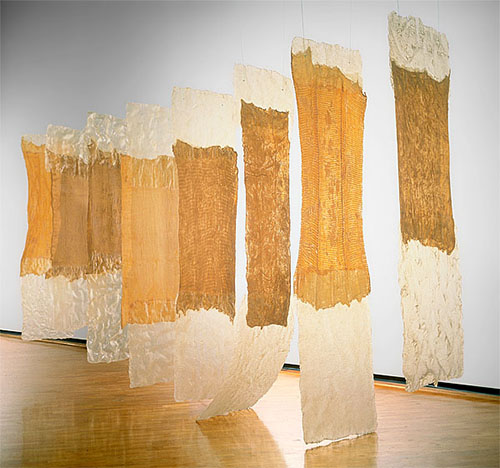 The panels in this work are made from fiberglass and latex over a kind of heavy-duty cheesecloth. Hesse was a kind of pioneer in her working methods, and she turned to working with these materials after creating a solid body of work from more “crafty” stuff like wound cord and papier maché. She worked extensively with the latex even though she knew it would become unstable over time. Unfortunately, most of these works have deteriorated beyond the point where they can be exhibited, so getting to see any of them in person is unlikely.
This piece has been the focus of my attention for the last several weeks. I just finished writing a research paper on it for my Understanding Visual Culture class. Eva Hesse created this work during the last year of her life, mostly through the assistance of other people, because of her illness due to a brain tumor. She died when she was just 34 years old.

Five pencil drawings on yellow lined paper, now with the Eva Hesse Archives at the Allen Art Museum, Oberlin College, Oberlin, Ohio, are clearly related to Contingent . 7 One of these drawings, extensively annotated suggest that Hesse may once have thought of the sculpture as a single piece hung from the wall. Her annotations consider various possibilities: ‘(1) stand up on lower section holes to attach to wall not necessarily straight can come forward (2) center rubber clutched together with rubber wires or cord, string or mixed [?] nothing form however it becomes naturally (3) top held up or fallen over, either way’. There is also a large drawing, in pencil and ink wash, which shows the arrangement of Contingent close to its final form. 8
Hesse’s health began deteriorating again. She spent eleven days in bed before finally installing Contingent at theFinch College Museum of Art. She managed to attend the opening of ‘Art in Process IV’ on 11 December 1969, and was delighted with Contingent: ‘Anyway , did go to Finch’, she noted in the manuscript describing the course of her disease and hospitalisation, ‘and it was an opening and I was told how great my piece was. I enjoyed [myself] despite feeling lousy.’ 12 But she was back in hospital over Christmas and New Year. On 30 March 1970 she underwent her third operation for a brain tumour. In May 1970 an image of Contingent filled the cover of Artforum . But this sudden recognition was, for Hesse herself, brief. She died in New York Hospital on 29 May 1970, aged thirty-four.