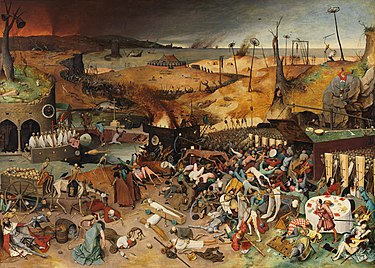 The painting shows a panorama of an army of skeletons wreaking havoc across a blackened, desolate landscape. Fires burn in the distance, and the sea is littered with shipwrecks. [3] A few leafless trees stud hills otherwise bare of vegetation; fish lie rotting on the shores of a corpse-choked pond. Art historian James Snyder emphasizes the “scorched, barren earth, devoid of any life as far as the eye can see.” [1] In this setting, legions of skeletons advance on the living, who either flee in terror or try in vain to fight back. In the foreground, skeletons haul a wagon full of skulls; in the upper left corner, others ring the bell that signifies the death knell of the world. People are herded into a coffin-shaped trap decorated with crosses, while a skeleton on horseback kills people with a scythe. The painting depicts people of different social backgrounds – from peasants and soldiers to nobles as well as a king and a cardinal – being taken by death indiscriminately. [4]
A skeleton parodies human happiness by playing a hurdy-gurdy while the wheels of his cart crush a man like he’s nothing. A woman has fallen in the path of the death cart; she has a slender thread which is about to be cut by the scissors in her other hand—Bruegel‘s interpretation of Atropos. Nearby another woman in the path of the cart, holds in her hand a spindle and distaff, classical symbols of the fragility of human life—another Bruegel interpretation of Clotho and Lachesis; a starving dog nibbles at the face of a dead child she holds. Just beside her, a cardinal is helped towards his fate by a skeleton who mockingly wears the red hat, while a dying king’s barrels of gold and silver coins are looted by yet another skeleton; the foolish and miserly monarch’s last thoughts still compel him to reach out for his useless and vain wealth, making him oblivious of repentance. In the centre, a sleeping pilgrim has his throat cut by a robber-skeleton for his money purse; above the murder, skeleton-fishermen catch people in a net. In the bottom right-hand corner, a dinner has been broken up and the diners are putting up a futile resistance. They have drawn their swords in order to fight the skeletons dressed in winding-sheets; no less hopelessly, the jester takes refuge beneath the dinner table. The backgammon board and the playing cards have been scattered, while a skeleton thinly disguised with a mask (possibly the face of a corpse) empties away the wine flasks. Of the menu of the interrupted meal, all that can be seen are a few pallid rolls of bread and an appetiser apparently consisting of a pared human skull. Above, a woman struggles in vain while being embraced by a skeleton in a hideous parody of after-dinner amorousness. To the right as the fighting breaks out, a skeleton in a hooded robe mockingly seems to bring another dish, also consisting of human bones, to the table—horrifying another woman with the realisation of mortality. [5]

The painting shows a landscape of death. The scenery is bleak and dead, with no life blooming in any form. There are fires burning in the background and an army of skeletons are taking apart everything.
His works were usually based on religious themes, lifestyle of the peasants, or proverbs that were popular at the time.

Luckily, infra-red reflectography and a detailed examination of the copies made by Bruegel’s sons have made it possible to correctly reintegrate petite lost elements that were lost during incorrect reconstructions of the image’s earlier restorations.
It makes sense that he was a successful printmaker before turning to painting in the 1550s, as well as the fact that he was neither a peasant nor of noble birth. Throughout his life, as evidenced by his preserved artworks, Pieter Bruegel the Elder had a clientele of well-connected patrons.

The Vienna exhibition commemorates the 450th anniversary of his death.
This week a symposium at the Kunsthistorische Museum, The Hand of the Master, which will focus on material and technical aspects of the work, brings together some of the world’s most renowned Bruegel scholars, conservators, and scientists. The moralising sense of the scene is the result of Hieronymus Bosch’s influence. The entire painting is cast in a reddish-brown tone adding some hellish motif for the subject.
As María Antonia López de Asiain put it , the painting has undergone several previous restorations , which actually masked the original paint. The present team of restorers used infrared reflectography and studied the copies of the painting made by Peter Breugel’s sons to rebuild its original state and reveal the small lost elements invented in previous treatments with erroneous reconstruction.