It is fully documented and referenced in the below catalogue raisonnés and texts (copies will be enclosed as added documentation with the invoices that will accompany the final sale of the work):
Prudence (latin PRUDENTIA): “Each of these objects suggests a different aspect of prudence: the sieve or colander – the sifting out of good from evil, rejecting the bad, retaining that which makes for a life of virtue; the coffin – the inevitable death that awaits all men, in awareness of which they should live each day prudently; the mirror – self-knowledge” (Klein 128). Featuring the Gothic P with Flower watermark (Br. 8743). 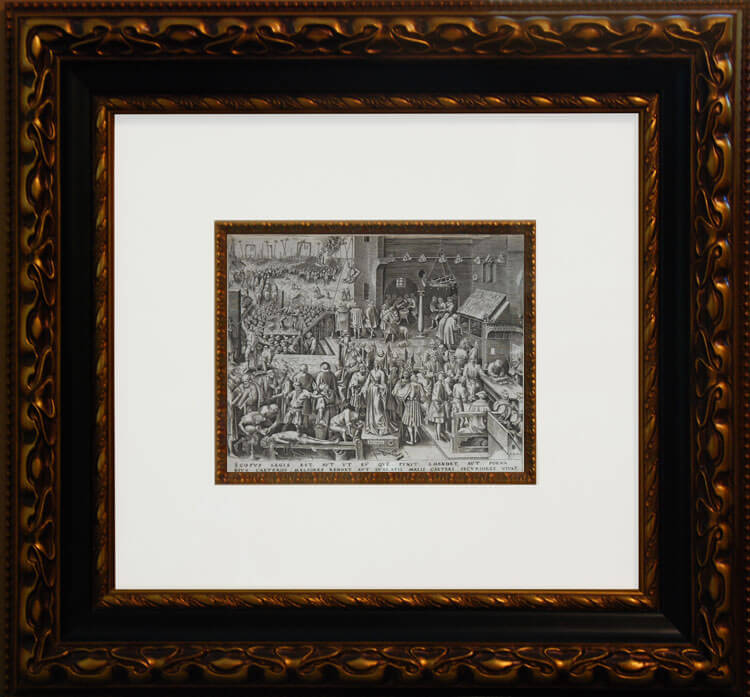 At first glance, the modern viewer will likely see in this original etching a satirical commentary on the means of justice implemented in the 16th century Netherlands. As Arthur Klein points out, however, the composition is actually a serious, detailed overview, “of grim but not reprehensible social practices” (126). The Latin inscription at the bottom of the composition confirms this interpretation, noting “The aim of law is either to correct him who is punished, or to improve others by his punishment”(Bastelaer, 180). Images of thieves’ hands being cut off and criminals being hanged shock us but, Klein reminds us, images of the electric chair may appear equally gruesome in the future.
1) Van Bastelaer, René. The Prints of Peter Bruegel the Elder, Catalogue Raisonné New Edition. San Francisco: Alan Wofsy Fine Arts, 1992. Image listed as plate 135 on p. 180.

1559
Drawing on paper, 224 x 300 mm
MusГ©es Royaux des Beaux-Arts, Brussels
Between 1556 and 1559, at the request of Hieronymus Cock, the well-known publisher of prints, Pieter Bruegel made the initial drawings for two series of engravings dedicated to the Seven Mortal Sins and the Seven Virtues respectively. In the Brussels drawing, which represents the cardinal virtue of Prudence, the figures are making all kinds of provident preparations for the future, following the recommendations of the Latin caption. “If you wish to be prudent, set your eyes on the future and make provision for everything that can happen”.