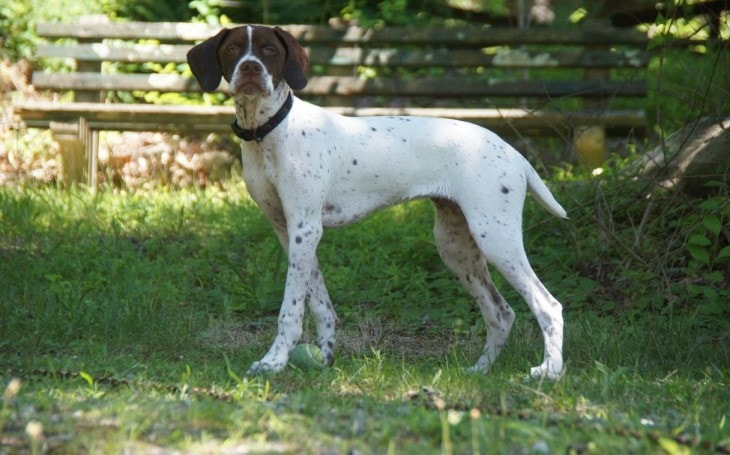 The Canadian Kennel Club (CKC) and North American Versatile Hunting Dog Association (NAVHDA) were the first clubs to recognize the Braque Francais Pyrenean outside of Europe.
The Braque Francais Pyrenean breed was originated in the south of France. This breed is very similar to Braque Francais Gascogne and until the mid of 19th century, they both were considered one. They were spilled into two distinct breeds. The Gascogne was considered to be the large breed with a thick coat and squarer muzzle and the Pyrenean considered to be the smaller one with finer coat and more mottled brown in its coloring.

The Braque Francais is a smart and friendly breed that was originally developed for hunting and tracking. This breed gets along well with people and generally does well with other dogs, though its hunting instincts may make it a poor choice for households with small non-canine pets. These dogs are naturally affectionate and loving with their human companions and they love to spend time with people. The Braque Francais breed is prone to developing severe separation anxiety if left alone for long periods of time and it requires plenty of socialization and early training. When raised from a young age, these dogs get along well with children, though they may be a little rough for toddlers.
The Braque Francais is a medium- to large-sized breed so it requires a dog food diet formulated specifically for dogs of its size. It is also important to note that the breed was developed as a working breed so, if you plan to train your Braque Francais for hunting or other tasks, you may want to feed your dog an active or working breed formula. When choosing a dog food, make sure to select one made with high-quality ingredients including animal protein and digestible carbohdyrates.

The first breed club was formed in 1850, and the standards for both breeds were written in 1880. It is recognised in its home country by the French Kennel Club (Société Centrale Canine, S.C.C) and internationally by the Fédération Cynologique Internationale. [1] [2] The S.C.C. prohibits inbreeding or linebreeding and will not register any dog with common ancestors in the first three generations of its pedigree. [4] Of the major kennel clubs in the English-speaking world, only the Canadian Kennel Club in Canada and the United Kennel Club in the U.S. recognise them. The Canadian Kennel Club recognises one breed, the Braque Français (Gascogne) in its Sporting Dogs Group [5] and the United Kennel Club recognises both breeds, in its Gundog Group, with the names Braque Francais De Grande Taille and Braque Francais, De Petite Taille – petite taille (smaller size) means the Pyrenean is smaller than the Gascogne, and does not mean that it is a little dog. [6] [7] The breeds are also recognized by many minor registries, hunting clubs, and internet-based dog registry businesses under various versions of the names, and promoted as rare breeds for those seeking unique pets.
The original Braque français type of pointing dog has existed since the fifteenth century. Over the centuries the dogs were taken to other countries and were crossed with other breeds. When a search was made at the end of the nineteenth century to find the original dogs, two separate regional varieties were found. [3] They may be descended from the Old Spanish Pointer or Pachon Navarro, and the now extinct Southern Hound.

The Braque Francais Pyrenean was originally strictly a hunting dog but over the years he has transitioned into a loving family companion. He is not a dominant dog and is extremely eager to please his family. He is a good choice for families with children when he is properly trained. The Braque Francais Pyrenean is not an ideal watchdog since he is not overly territorial and loves everyone he meets. He is a sporting dog and does require plenty of time to exercise. He is not happy when he is relegated to the backyard with no social interaction with his family.
The Braque Francais Pyrenean is generally a low maintenance dog when it comes to grooming requirements. He should be brushed weekly or at the very least every other week to keep him fresh and clean. Brushing him often will remove any loose or dead hairs and dirt that have accumulated on the dog. He is a mild shedder, grooming regularly will minimize the amount of loose hairs that are seen floating around the house. Use a natural bristle brush when grooming. He does not need to be bathed often, usually only two to three times a year. His nails should be trimmed as needed, usually every two to three weeks. Check his ears weekly for dirt or foul smell. Clean them as needed using a cotton ball and hydrogen peroxide to prevent infections from occurring. Set up a routine dental plan to ensure that he has healthy teeth and gums. Brush his teeth weekly and if necessary, set up a professional teeth cleaning once a year.

The Pyrenees type is what most people are referring to when they use the term Braque Francais in the U.S. The Gascogne type is very rare to the US. The Pyrenees are beautiful with their white and chestnut-brown color and smaller and lighter frames. They are more spirited and faster than Gascogne. They have finer and shorter hair with barely folded ears with brown or white ticked or speckled coat.
Extended legs, drop ears, and a traditionally docked tail, these are handsome dogs. The coat is low and light speckled with dark color. You will find them with large brown spots.