Roman sculpture played an important part of the Roman daily life. Sculptures took the form of full statues, busts (sculptures of just a person’s head), reliefs (sculptures that were part of a wall), and sarcophagi (sculptures on tombs). The Ancient Romans decorated with sculptures in a number of places including public buildings, public parks, and private homes and gardens.
The walls of the homes of wealthy Romans were often decorated with paintings. These paintings were frescos painted directly on the walls. Most of these paintings have been destroyed over time, but some of them were preserved in the city of Pompeii when it was buried by the eruption of a volcano. In more recent times a more balanced view of Roman art and a wider one provided by the successes of archaeology have ensured that the art of the Romans has been reassessed and its contribution to western art in general has been more greatly recognised. Even those holding the opinion that Classical Greek art was the zenith of artistic endeavour in the west or that the Romans merely fused the best of Greek and Etruscan art would have to admit that Roman art is nothing if not eclectic. Inheriting the Hellenistic world forged by Alexander the Great’s conquests, with an empire covering a hugely diverse spectrum of cultures and peoples, their own appreciation of the past, and clear ideas on the best way to commemorate events and people, the Romans produced art in a vast array of forms. Seal-cutting, jewellery, glassware, mosaics, pottery, frescoes, statues, monumental architecture, and even epigraphy and coins were all used to beautify the Roman world as well as convey meaning from military prowess to fashions in aesthetics.
Roman mosaics artists developed their own styles, and production schools were formed across the empire which cultivated their own particular preferences – large-scale hunting scenes and attempts at perspective in the African provinces, impressionistic vegetation and a foreground observer in the mosaics of Antioch, or the European preference for figure panels, for example. The dominant (but not exclusive) Roman style in Italy itself used only black and white tesserae, a taste which survived well into the 3rd century CE and was most often used to represent marine motifs, especially when used for Roman baths. Over time the mosaics became ever more realistic in their portrayal of human figures, and accurate and detailed portraits become more common. Meanwhile, in the Eastern part of the empire and especially at Antioch, the 4th century CE saw the spread of mosaics which used two-dimensional and repeated motifs to create a ‘carpet’ effect, a style which would heavily influence later Christian churches and Jewish synagogues. 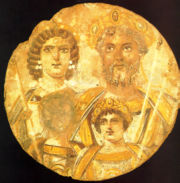 Pantheon (c.125 CE)
Dating back to Etruscan times, and located in the valley between the Aventine and Palatine hills, this was the main Roman chariot racing venue in Rome, Italy. Measuring roughly 2,000 feet in length (610 metres) and 400 feet in width (120 metres), it was rebuilt in the age of Julius Caesar to seat an estimated 150,000 spectators, and again during the reign of Constantine to seat about 250,000. It is now a park. 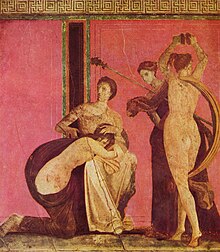 The Romans did not generally attempt to compete with free-standing Greek works of heroic exploits from history or mythology, but from early on produced historical works in relief, culminating in the great Roman triumphal columns with continuous narrative reliefs winding around them, of which those commemorating Trajan (113 CE) and Marcus Aurelius (by 193) survive in Rome, where the Ara Pacis (“Altar of Peace”, 13 BC) represents the official Greco-Roman style at its most classical and refined, and the Sperlonga sculptures it at its most baroque. Some late Roman public sculptures developed a massive, simplified style that sometimes anticipates Soviet socialist realism. Among other major examples are the earlier re-used reliefs on the Arch of Constantine and the base of the Column of Antoninus Pius (161), [41] Campana reliefs were cheaper pottery versions of marble reliefs and the taste for relief was from the imperial period expanded to the sarcophagus.
The earlier group are “among the most vivid portraits to survive from Early Christian times. They stare out at us with an extraordinary stern and melancholy intensity”, [25] and represent the best surviving indications of what high quality Roman portraiture could achieve in paint. The Gennadios medallion in the Metropolitan Museum of Art in New York, is a fine example of an Alexandrian portrait on blue glass, using a rather more complex technique and naturalistic style than most Late Roman examples, including painting onto the gold to create shading, and with the Greek inscription showing local dialect features. He had perhaps been given or commissioned the piece to celebrate victory in a musical competition. [26] One of the most famous Alexandrian-style portrait medallions, with an inscription in Egyptian Greek, was later mounted in an Early Medieval crux gemmata in Brescia, in the mistaken belief that it showed the pious empress and Gothic queen Galla Placida and her children; [27] in fact the knot in the central figure’s dress may mark a devotee of Isis. [28] This is one of a group of 14 pieces dating to the 3rd century AD, all individualized secular portraits of high quality. [29] The inscription on the medallion is written in the Alexandrian dialect of Greek and hence most likely depicts a family from Roman Egypt. [30] The medallion has also been compared to other works of contemporaneous Roman-Egyptian artwork, such as the Fayum mummy portraits. [22] It is thought that the tiny detail of pieces such as these can only have been achieved using lenses. [31] The later glasses from the catacombs have a level of portraiture that is rudimentary, with features, hairstyles and clothes all following stereotypical styles. [32] 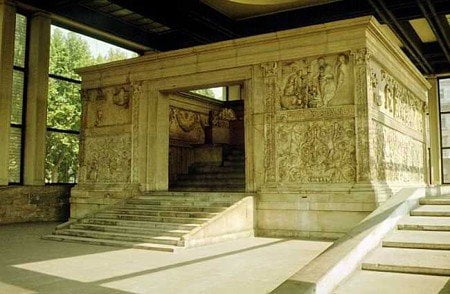 The building of the Altar of Augustan Peace was commissioned by the Roman Senate on July 4, 13 BC to honor Emperor Augustus, who was returning from successful campaigns in Spain and Gaul. On its completion on January 30, 9 BC, it was arguably one of the finest examples of Roman art, and a huge leap in the Roman art of portraiture. Surrounded by high walls, Ara Pacis has two entrances, one on the east and another on the west. Almost all the inner and outer walls have been carved with beautiful sculptures and decorative friezes. But it is the decoration on the exterior of the precinct walls that stands out, along with depictions of a procession of imperial house members on the north and south walls. The east and west walls are carved with images that highlight the themes of peace and Roman civic rituals. The Romans enjoyed a period of remarkable peace during the reign of Augustus, and the altar itself became symbolic of Pax (meaning peace), something that Augustus was able to maintain for a significant proportion of his reign.
Although this masterpiece is more reminiscent of ancient Greek art and culture, the Roman marble copy of the spear bearer or the Doryphoros is remarkable. This gem is said to be the Doryphoros of Polykleitos, an astounding Greek sculpture depicting an athlete bearing a spear in his left hand with the tip balanced over his shoulder. The earliest Roman marble copies date from 120 to 50 BC in Pompeii. Instead of making the sculpture out of bronze like the ancient Greeks, the Romans created their Doryphoros using marble, which was far cheaper. This led to a popular trend among the ancient Romans of including one or more such statues in the gardens and houses of wealthier patrons. While nothing of the original spear bearer survives today, its popularity among Roman patrons and emperors led to its prominence in art history.